November 30th was the last day for public comments on EPA’s proposal to significantly update air emissions limits for most of the oil and natural gas industry.  The proposal makes much-needed revisions to existing requirements, which in some cases are over 25 years old, and in expanding the coverage of these rules, recognizes the significant changes and expansion in the industry that has taken place since the rules were issued.   The proposed rules make real progress in advancing cleanup for some of the biggest sources of pollution from the industry, but they do not go anywhere near far enough to curb the wholesale dumping of methane and other pollutants into the air.

EPA has undoubtedly received many comments on these rules and CATF, along with other groups, has prepared detailed comments on both the rules for air toxics and the performance standards for “criteria” pollutants (EPA’s proposal addresses criteria pollutants that are precursors of ground level ozone and airborne particles, two major threats to public health). 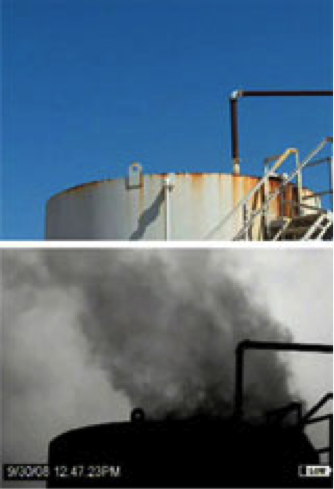 Natural gas equipment can leak terribly without looking terrible. The infrared image (below) shows the leaks (mainly methane) that are invisible to the eye.

Our biggest concern is EPA’s unwillingness to directly regulate methane pollution.  Three points must be made clear:

In our comments, we have pointed out many other places where EPA must tighten its regulations.  For example, the proposed rule makes a lot of progress for gas wells that are hydraulically fracked.  But we are very concerned about air pollution from “conventional” gas wells (which are not fracked) and oil wells.  But, again, the largest problem is EPA’s failure to regulate methane emissions from this industry.

EPA must fix these problems.  Seldom does EPA get such low-hanging fruit: regulation that would improve public health by reducing ozone and particles, protect the climate, and help the economy.  For the sake of public health as well as to prevent further waste of this important energy source, EPA should do what it must do to put such rules in place as quickly as possible.