After years of talk, things are starting to get real: developers are looking at pioneering underground coal gasification (“UCG”) projects in Wyoming. Some may see these projects as first steps to finally producing truly clean energy from coal, while others may perceive them as unnecessary, risky experiments. What’s the truth? Let’s explore the issues.

First, some unpleasant facts. Fossil fuel use has increased dramatically across the globe (China’s coal power plant fleet, most of it built in the last 10 years, is now more than twice the size of ours in the US) and appears likely to continue to mushroom (in South Asia alone there are 600 million people – roughly twice the population of the US – waiting for access to electricity). Even in the center of Europe, Germany, in its rush to move away from nuclear power, is considering building more coal power instead. And in the US, where coal usage has declined slightly, another plain fossil fuel – natural gas – has taken up the slack, with limited greenhouse gas advantages.

Many environmentally-minded people suggest that civilization should move away from fossil fuels (and nuclear power) entirely. But when experts do the math, they find that proposals to power civilization exclusively with sun, wind, and waves are just what they sound like – a seaside vacation, and unfortunately not a plausible solution to our global climate crisis. In California, a recent study highlights the difficulty in meeting even a 60% greenhouse gas emission reduction target through copious application of renewable power, since wind and sun must be complemented by natural gas or something else during the roughly two-thirds of the year when they aren’t available.

In this context, carbon capture and storage (CCS) technology has an important role to play in treating the emissions of CO2 at the source, just as sulfur scrubbers have helped reduce acid rain in the past. We know CCS will work with fossil fuels to provide baseload power, because the components of CCS systems have been used at commercial scale for decades in industry. Unfortunately, though, CCS currently increases the costs of utilizing fossil fuels, and consumers are generally reluctant to shoulder this additional burden, especially during challenging economic times. This is where UCG comes in.

Underground coal gasification is the process of injecting air (or oxygen) through a well into a deep coal seam to support chemical reactions that convert the coal to ‘syngas’ (a gaseous fuel primarily containing hydrogen and carbon monoxide). This syngas is then extracted through additional wells, and can be used to fuel a power plant. CCS can be applied to UCG by removing carbon from the syngas using conventional processes (read more here) and sequestering the CO2 geologically (more here). But in the case of UCG, the costs for this may be significantly lower because there is no need for coal handling and processing equipment, no need to construct a massive steel gasifier, and the raw gas may be considerably cleaner to start with (some sulfur and quite a bit of inorganic material may stay below ground, for example).

Although UCG is a novel technology, preliminary CATF analyses indicate that the cost of producing UCG power WITH CCS close to the cost of producing power from a conventional coal power plant without CCS. Our analysis is summarized in the figure below. If these costs prove true, this could be a game-changer for CCS utilization, especially in the developing world. 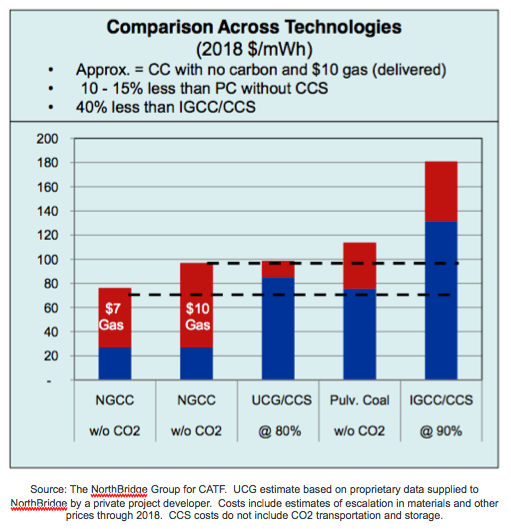 UCG has other potential advantages as well. The coal that fuels the process is not mined, reducing the surface impact of the energy source. And the spatial footprint of UCG operations could be significantly less than the footprint necessary to extract an equivalent amount of energy from coal bed methane and similar technologies. Also, a UCG project may be a net producer of water, as opposed to net consumer, depending on the circumstances of an individual project. For these reasons and more, there is cause to believe that UCG could hold considerable promise as a cost-effective path to cleaner coal.

UCG is not without its risks, however. There have been several dozen small UCG trials since the 1950s, and in a handful of cases groundwater contamination and surface subsidence resulted. Based on this history, communities likely will be cautious about proposals for new UCG projects in their area. But several points are important here: UCG cannot result in underground coal fires (1000 feet or more below the surface, only oxygen intentionally supplied through a well will support combustion); properly done, UCG won’t result in surface subsidence (in part because of the depth); and finally, new site screening and operational methodologies and technologies promise greater site isolation (and hence groundwater protection) than in previous trials.

There is a lot yet to learn about the pioneering UCG projects in Wyoming. Many risks and benefits depend on site details. Transparency on the part of developers and permitting authorities will almost certainly be important for local communities evaluating the projects. But the big picture remains: if we can bring down the costs of CCS, we have a much better chance of preventing climate change. CATF analysis suggests that UCG, operated safely, could be a critical part of that global effort.