An Energy Revolution in the Making

Superhot rock geothermal energy is a visionary technology deserving of investment, and yet almost entirely unrecognized in the decarbonization debate. It has the potential to meet long-term demands for zero-carbon, always-on power, and can generate hydrogen for transportation fuel and other applications. Unlocking the potential of this energy source could expand our options and potentially carve a path forward to replace fossil fuels. 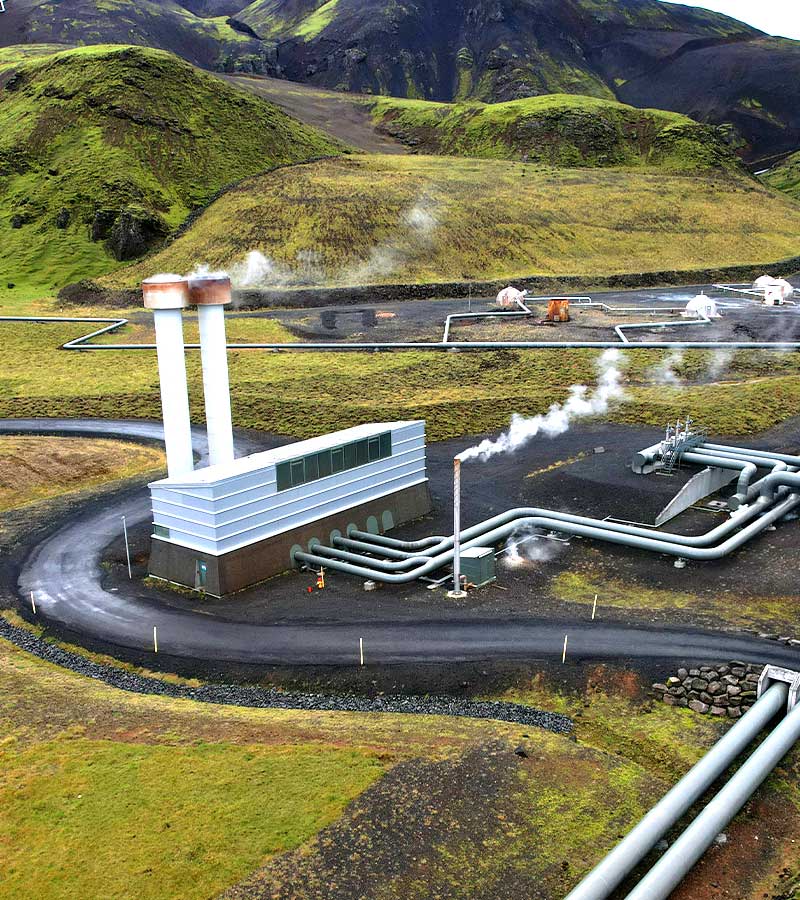 Rapid energy innovation is clearly needed now to meet the immense climate challenge. Vast amounts of reliable and dispatchable (always available) zero-carbon power will be needed to support the demand for access to energy by the growing global population. At CATF, we envision a future where superhot rock energy could play a big role in transforming the energy system as a vital part of a prosperous, carbon-free global economy.

How does superhot rock energy work?

In a superhot rock system, water is injected deep into hot fractured rock, heated, and returned to the Earth’s surface as steam that can be used to produce power in electric turbines or to generate hydrogen using a high temperature process.

Superhot rock energy could have a few distinct advantages over other energy sources. It is projected to be affordable, requiring little area to produce large amounts of energy (high energy density) due to the very large amount of energy that can be produced per well. Superhot rock is expected to produce five to ten times as much energy as the power produced from one of today’s commercial geothermal wells.

For the last few years, CATF’s experts have researched this new zero-carbon energy technology and the opportunities we have to scale it in an affordable and broadly deployable way. We are working to build momentum behind this dispatchable, energy-dense resource, and to add it to the global decarbonization debate as a long-term strategy for meeting energy demand growth in a world without fossil fuels.

CATF’s vision is to rapidly scale superhot rock from demonstration to initial commercialization in this decade, and with parallel development of deep drilling methods, scale to “geothermal everywhere” in the 2030s. Superhot rock energy can be demonstrated today in areas with high near-surface heat, using existing technology, while adopting strategies and innovations from unconventional oil and gas development, such as intensive drilling campaigns, to accelerate deployment, scale and adoption. Future energy drilling innovations could allow accessing the superhot conditions in much deeper wells in mid-continental regions currently without geothermal resources.

The value of superhot rock energy

Where can superhot rock be developed?

The map below shows where wells have been drilled into superhot conditions, as well as some global projects investigating superhot rock. The darker reddish areas are generally regions where superhot rock is shallower, in the realm of current drilling technologies, and could be initially demonstrated and commercialized. The remainder of the world should be able to tap into superhot rock as super-deep drilling innovation allows.

What are the opportunities and challenges?

Key innovations are needed to rapidly deploy superhot rock energy, including deep drilling and heat reservoir development. While technically challenging, these are achievable innovations that could be quickly developed with adequate funding. One key challenge is developing fractured heat reservoirs that injected water can pass through to production wells. This will require methods that identify existing fractures that can be stimulated and injected without causing seismic activity. Research is underway in Japan and in other laboratories worldwide to develop aseismic methods in this more plastic superhot rock.

Successful commercial energy drilling enables global access to superhot rock geothermal energy. In the photo, energy is transformed into a torch that can soften or melt rock without mechanical grinding. Successful development of these technologies offer the potential to significantly reduce the time-consuming removal of superlong drill strings from deep wells to change worn drill bits. Such additional oil and gas innovations as skid rigs that can successively drill multiple wells from a single pad, and directional drilling provide further efficiencies, cost reductions and better targeting of resources.

If you have questions or are interested in learning more about our Superhot Rock Energy program and some of the latest innovations in this space, or would like to support our efforts in advancing this new technology, contact Chief Geoscientist Dr. Bruce Hill.

What is superhot rock geothermal?

Where can superhot rock geothermal be developed first?

How is superhot rock energy different from commercial geothermal power?

Conventional geothermal power is produced from hydrothermal fluid at temperatures between 100-300°C. In contrast, superhot rock energy will inject water and circulate it through a fractured heat reservoir and pump it to the surface. This process will heat and utilize water that has reached conditions exceeding 400°C. Water above this temperature is in the “supercritical” state, which has different advantageous properties such as being much more fluid and carrying higher heat content such that superhot rock  systems would bring far more energy to the surface. Superhot rock is widely considered to be the “holy grail” of geothermal energy.

What is geothermal energy and how has it evolved?

Geothermal energy is harnessed from the internal heat of the earth. Geothermal power is produced by drilling deep into the earth where it gets hotter as you go down. Where heat is shallow, such as regions with volcanic activity, groundwater is naturally heated and the resulting steam is captured and power generated by a turbine at the surface. Geothermal heat can also be used to provide hot water and district heating. Geothermal provides 66% of primary energy and 25% of electricity in Iceland.¹ The 66% includes district heating. Electricity in Iceland is dominated by hydro energy.

The first geothermal power was created in Italy early in the 20th century. But as of 2018 there was only 15 GW of geothermal power in the world. That’s equivalent to the same number of large fossil plants. Today’s commercial geothermal industry is small because it is limited only to regions with shallow heat.

¹ In 2014 Iceland had hydroelectric power stations with a total installed capacity of 1.986 MW, generating 72% of the country’s electricity production.

Recent innovations in geothermal energy are beginning to move away from natural steam based systems toward engineered geothermal systems (EGS) in hot dry rock (HDR) will have a much wider geographic use. Early work on such systems began at Los Alamos National Laboratory in the 1970s.

Superhot rock geothermal will be engineered hot dry rock, but in “superhot” rock conditions above 400 degrees celsius. In superhot rock systems, fresh water will be pumped down an injection well , through natural fractures in crystalline rock and be produced in a production well, pumped through a turbine, condensed and reinjected as part of a largely closed loop system. No carbon dioxide will be emitted as part of this process.

Yes. The term “superhot rock” is a less technical term for engineered supercritical water based geothermal systems. Supercritical water exists in a superheated state and has more heat and is far more fluid than hot water or steam. Therefore it can bring far more heat to the surface– an estimated 5-10x today’s commercial wells– giving it the potential to be competitive with today’s costs for power.

This high energy potential has been demonstrated in Iceland where the Iceland Deep Drilling Project’s Krafla borehole produced natural superhot water at 452°C and an estimated 36 megawatts of energy (MWe) production potential. AltaRock Energy projects that 25-45 MWe could be produced from a single production well at its Newberry superhot rock geothermal project) In comparison, a typical commercial hydrothermal geothermal project produces about 7-8 MW per well. Also for comparison, the Reykjanes geothermal field in Iceland–perhaps the hottest producing field in the world at 290-320°C–has 12 wells producing a total of 100 MWe from 2 turbines. There are over 2 dozen wells that have drilled into superhot rock around the world, but no power has yet to be produced.

It does not. It will be an entirely carbon-free form of energy.

Yes, for the purposes of human energy production the Earth’s heat is infinite (although scientists predict that the world’s geothermal heat will run out in about 5 billion years) Earth’s geothermal heat is a huge potential zero-carbon energy resource – Alta Rock Energy predicts that just 0.1% the earth’s internal heat could sustain the world’s energy demand for the next 2 million years. A 2007 report by MIT researchers estimated that the U.S. geothermal resource is 2,000 exajoules– two thousand times U.S. primary energy production.

Geothermal heat is a consistent dispatchable “baseload” source of energy. This means that unlike other renewable resources, geothermal energy doesn’t require the use of battery storage or fossil fuel supplementation and is consistently available for distribution. Deep drilling could provide the opportunity to access superhot rock geothermal worldwide for modernization and energy security.

How much do we expect superhot rock geothermal to cost?

Clean Air Task Force commissioned Hot Rock Energy Research Organization (HERO) and Lucid Catalyst to preliminarily estimate the “levelized cost of energy” for future mature (“nth of a kind”) power plants . Results suggest mature SHR will be competitive at $20-35 per MWh (Levelized cost of energy (LCOE) is a standard measurement in the energy industry that is used to compare the cost of energy sources, and is calculated by dividing the lifetime cost of a power plant by the total energy produced by that plant.)

What’s needed to speed the development of superhot rock geothermal?

Key innovations are needed to deploy superhot rock energy widely, including deep drilling and reservoir development in very high temperature and pressure conditions. While technically challenging, these are achievable innovations that could be developed relatively quickly with adequate funding—as was the case with unconventional fossil resource development. Indeed, oil and gas expertise should play a major role in commercializing and rapidly deploying superhot rock geothermal. An intensive drilling and resource development program by well-funded consortia that include oil and gas industry players could provide the knowledge and innovation needed to develop and rapidly commercialize superhot rock geothermal across the world.

What is energy drilling?

What are the next steps?