Innovation Policy for Climate Change: A Report to the Nation 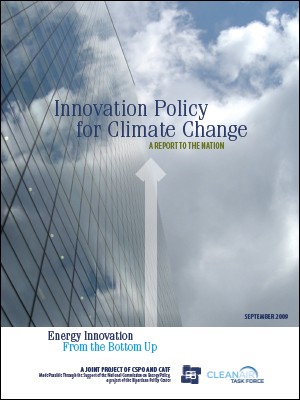 The world is not on a path to reduced greenhouse gas emissions. The suite of commercially viable climate-friendly energy technology needs to be expanded rapidly, which in turn requires appropriate government policies. The current high cost of delivering low-carbon energy means that energy-climate technologies must be treated by governments as a public good, akin to national defense, public health and disaster protection. Doing so can open up new avenues for energy-climate technology policy such as those that allowed the U.S. to lead the world in innovation for much of the 20th century. This report draws on the lessons of past U.S. government policy for technological innovation, as well as three workshops held in March and April of 2009. The workshops brought experts on innovation and government policy together with experts in three technologies–solar photovoltaics (PVs), post-combustion capture of carbon dioxide (CO2) from power plants, and direct removal of CO2 from the atmosphere (air capture)–not in search of consensus, but to probe and illustrate the complexities and opportunities of energy-climate innovation policy.*

The report concludes that:

Like other aspects of U.S. energy and climate policy, the nation’s approach to energy-climate innovation has lacked a clear mission and strategy. Most attention and discussion has focused on advanced research, yet most innovation in the coming decades will depend much less on frontier research than on other available and proven tools. (Indeed, in none of our workshops did “more research” surface as the major concern–not even for air capture, which, though radical in concept, is based on well-understood concepts and processes.) We know what works, based on the past 60 years and more of experience, but so far we have not used what we know to address energy technologies and climate change. We know, for example, that technological advances come largely from industry–but that government can catalyze, and even create, new waves of industrial innovation by supporting the technology base, providing incentives (such as those that have been so effective in expanding the market for PV systems), and deploying its purchasing power. By treating climate mitigation as a public good and GHG reduction as a public works endeavor, the United States can rapidly strengthen the linkages between public investment and private sector innovation, and begin to lead other countries toward building energy-climate technologies into the fabric of their innovation systems, their economies, and their societies.

Innovation Policy for Climate Change: A Report to the Nation