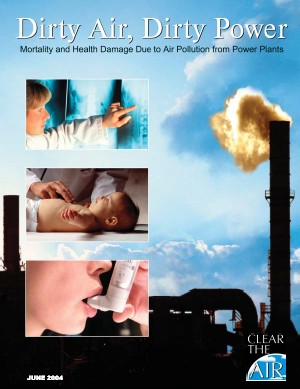 Asthma attacks, respiratory disease, heart attacks, and premature deaths – all of these are among the serious public health problems caused by air pollution from the electric power sector. In 2000, the Clean Air Task Force, on behalf of the Clear the Air campaign, commissioned Abt Associates to quantify the health impacts of fine particle air pollution from power plants. This study found that tens of thousands of people die prematurely every year and hundreds of thousands more suffer asthma attacks as a result of power plant pollution alone. With new research linking lung cancer deaths and heart attacks to power plant pollution, Clear the Air commissioned Abt Associates to update its 2000 study to reflect this new science and examine different policies being debated at the federal level to clean up power plants. This report summarizes the findings of the Abt Associates study, reviews the contribution of power plants to particle pollution, and compares the relative benefits of the chief policy proposals to reduce power plant fine particle pollution. Key findings include:

For more than thirty years, the oldest, dirtiest coal-burning power plants have circumvented air emissions standards required of modern power plants. As a result, these “grandfathered” power plants are permitted to emit more than 10 times more nitrogen oxides and sulfur dioxide than modern coal plants. The Bush administration’s administrative rollbacks of New Source Review and the statutory rollbacks embodied in its proposed legislation would continue this lethal legacy. Polluting coal-fired plants must be made to comply with modern emission control standards. In addition, the nation’s power fleet should be held to stringent caps on all four key power plant pollutants, including nitrogen oxides, sulfur dioxide, mercury, and carbon dioxide. Requirements such as these can ensure that U.S. energy policy better accounts for the public health and environmental costs associated with electricity production and will propel us toward a more sustainable energy future.

Not in My Lifetime: The Fight for Clean Water in Town of Pines, Indiana