Unfinished Business: Why the Acid Rain Problem is Not Solved 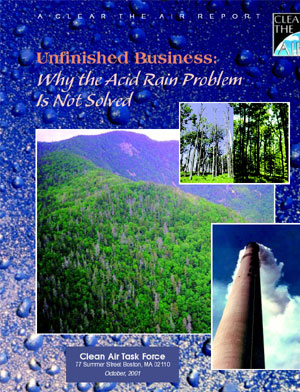 What is acid rain?

Acid rain is the common term used to describe wet, dry and fog deposition of sulfates and nitrates. When sulfur dioxide and nitrogen oxides are emitted through the burning of fossil fuels into the atmosphere, they come into contact with water where they are converted to sulfur and nitrogen based acids, which can be as acidic as lemon juice.

Over a decade ago, widespread damage from acid rain to forests and waters prompted government action to reduce the threat. In North America, the US Clean Air Act, the Eastern Acid Rain Program in Canada and cooperative agreements between the US and Canada led to significant declines in emissions of sulfur dioxide across large regions of North America. With the passage of the 1990 Clean Air Act Amendments, many hoped that its 50 percent reduction in sulfur dioxide (SO2) emissions  a cut of 10 million tons  and a reduction of two million tons of oxides of nitrogen (NOX) from the utility industry would be enough to support swift recovery of ecosystems damaged by acid rain.

There is no question that legislation to date has made a positive difference. Reductions in emissions of acidic compounds have been followed by reductions in deposition, and chemical improvements in some soils and waters have been documented. But despite the emissions reductions, the problem of devastated forests, lakes, streams and ecosystems due to acid rain has not been solved. A growing body of evidence shows that without significant additional cuts in acid rain-forming emissions many of the problems associated with acid rain will persist for many, many decades.

The reason for this is that even with current and anticipated reductions, emissions are still much higher than preindustrial levels. Over the past 150 years, millions and millions of tons of acidic compounds have fallen to the earths surface. This long history of acid burden means that ecosystems throughout North America remain damaged and at risk.

Since passage of the Clean Air Act Amendments of 1990, scientists better understand ways in which acid rain alters ecosystems. We now know that if we are to reverse the chemical effects of acid rain accrued over a century and a half, we must further reduce emissions of acidic compounds.

This report documents that:

Even after the cuts required by the current Acid Rain law have taken place:

Greater emission reductions will be needed to support recovery

Analyses conducted at sites in New Hampshire, New York and Virginia indicate that only with deeper cuts in emissions of acid compounds  up to 80 percent beyond Clean Air Act Amendments of 1990  will biological recovery be able to begin by mid century in acidsensitive areas of North America.

The needed reductions can come today from a mixture of energy options including expansion of the nations use of energy efficiency, clean renewables, cleaner fuels and pollution control equipment.

Unfinished Business: Why the Acid Rain Problem is Not Solved