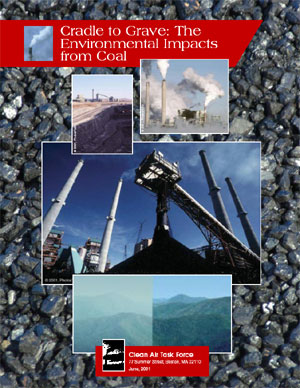 The electric power industry is the largest toxic polluter in the country, and coal, which is used to generate over half of the electricity produced in the U.S., is the dirtiest of all fuels. From mining to coal cleaning, from transportation to electricity generation to disposal, coal releases numerous toxic pollutants into our air, our waters and onto our lands. Nationally, the cumulative impact of all of these effects is magnified by the enormous quantities of coal burned each year  nearly 900 million tons. Promoting more coal use without also providing additional environmental safeguards will only increase this toxic abuse of our health and ecosystems.

The trace elements contained in coal (and others formed during combustion) are a large group of diverse pollutants with a number of health and environmental effects. They are a public health concern because at sufficient exposure levels they adversely affect human health. Some are known to cause cancer, others impair reproduction and the normal development of children, and still others damage the nervous and immune systems. Many are also respiratory irritants that can worsen respiratory conditions such as asthma. They are an environmental concern because they damage ecosystems. Power plants also emit large quantities of carbon dioxide (CO2), the greenhouse gas largely responsible for climate change.

The health and environmental effects caused by power plant emissions may vary over time and space, from short-term episodes of coal dust blown from a passing train to the long-term global dispersion of mercury, to climate change. Because of different factors like geology, demographics and climate, impacts will also vary from place to place. For example, effects from coal mining may be the biggest concern in the coal-field regions of the country, while inhalation exposure may be the foremost risk in an urban setting and, in less populated rural America, visibility impairment and haze may be of special concern.