Whatever the symbolic importance of the Keystone XL decision, it is only one of several climate-related policy decisions facing the Administration this year – and arguably one of the less significant ones. The Environmental Impact Statement on the project produced by the U.S. Department of State estimates that stopping the pipeline would avoid between 3 and 21 MMT CO2e (carbon dioxide equivalent) in U.S. greenhouse gas emissions annually. While environmental commenters have suggested that this estimate may understate these benefits, they haven’t yet provided alternatives.

The bar chart below compares the CO2e emissions of the Keystone XL project (showing the highest estimate for that project) with several other current opportunities to reduce greenhouse gases: 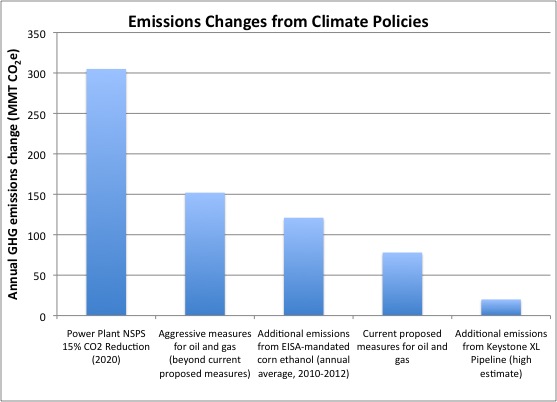 Last year, EPA Administrator Jackson promised to promulgate a New Source Performance Standard (NSPS) for greenhouse gases from new and existing coal-fired power plants. A policy that achieves a 15 percent reduction in coal plant CO2 by 2020 merely by relying more on existing, cleaner generation resources, would reduce annual GHG emissions by 305 MMT CO2e. At this point, it is unclear whether the EPA will propose a final NSPS rule this year, although a long-overdue court-ordered draft rule is about to be released.

In August 2011, US EPA proposed a significant update to the New Source Performance Standards (NSPS) for the oil & gas industries. EPA is scheduled to issue a finalized rule by 3 April 2012. EPA estimates that these rules will reduce annual methane emissions from the oil production and the entire natural gas industry by 3.1 MMT of methane, or 78 MMT CO2e per year (using a 100-year global warming potential for methane).

While this an important start, there are a number of feasible measures to reduce emissions from this sector that EPA could have included in the proposed NSPS, but did not. These include: covering emissions sources unregulated under the proposed NSPS, such as oil wells, conventional (non-fracked) gas wells, and gas distribution systems; more aggressive measures to mitigate some sources; and requiring mitigation measures for the equipment existing prior to August 2011. CATF estimates that implementation of these additional measures could reduce methane emissions by up to an additional 6.1 MMT of methane, or 152 MMT CO2e, per year (beyond the amount of emissions than will be mitigated by the NSPS, if finalized as proposed).

Lastly, the Energy Independence and Security Act (EISA) of 2007 mandated a substantial ramp-up of the minimum annual consumption of corn ethanol (Renewable Fuel Standard 2 or RFS2). Corn ethanol, as it is currently produced, has a much higher lifecycle impact on climate than gasoline, so this mandate substantially increases the lifecycle impact of burning US transportation fuels. If US drivers used gasoline instead of an energy equivalent amount of the corn ethanol being produced and consumed in 2010-2012 in accordance with the EISA-mandated ramp-up, the avoided GHG emissions during that period would have averaged 121 MMT CO2e per year. In theory at least, carbon re-sequestration by subsequently planted energy crops could eventually offset that difference — but that process will take about 40 years, according to an analysis of EPA data by CATF.

Whatever one’s view of Keystone, all of us in the environmental community need to not lose focus on other, much greater opportunities to slow climate change. The Obama Administration this year can take an important first step in the battle to significantly ramp down our CO2 emissions by proposing strong greenhouse gas performance standards for coal plants.

GHG Regs Must Be Top Priority