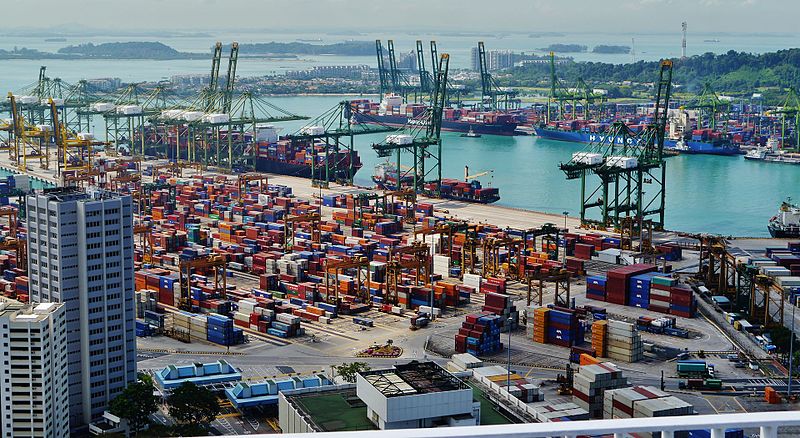 The decarbonization plans of Singapore are worth paying attention to both because of the city’s ability to set decarbonizataion trends in the region, and its global role in the shipping industry. In this blog, we take a look at the country’s options.

Climate change has created unprecedented challenges for countries to reduce their carbon emissions and transition to energy systems that are kinder to the environment. Singapore, a rapidly growing city-state and major business hub in Southeast Asia, aims to peak its emissions at no higher than 65 MtCO2e around 2030 and to reduce its emissions to 33 MtCO2e by 2050.

Singapore’s long-term objective is to achieve net-zero as soon as feasible after 2050. With a significant decarbonization challenge ahead due to its renewable energy resources constraints, Singapore is looking to develop and deploy additional low-carbon solutions. Two recent studies concluded that hydrogen and carbon capture, utilization, and storage (CCUS) are important for decarbonization in Singapore with key applications at port, maritime fuels, power generation and heavy-duty transport

As a first regional mover, Singapore is fostering strong cooperation and partnership with other Southeast Asian and international countries to achieve its decarbonization targets. This could have significant implications in the region to accelerate the development of a zero-carbon fuels supply chain.

Despite its lack of natural resources and limited land availability, Singapore has transformed itself into a central hub for business and trade. It has expanded its territory by reclaiming land from the sea. It has risen as the world’s major bunkering hub and is the second-largest global port by cargo throughput. It has also become a major technological hub in Southeast Asia with an export-oriented industry home to one of the world’s leading energy and chemical hubs. My work prior to joining CATF included several visits to Singapore to support energy efficiency and decarbonization projects in Jurong Island, Singapore’s massive energy and chemical hub. Singapore’s bunkering and energy hub international relevance becomes almost tangible when looking at its industrial and maritime landscape. However, the energy required to power the country’s economy and industrial operations is associated with the largest contribution of carbon dioxide emissions in Singapore.

In 2018, 46% of Singapore greenhouse gas emissions (GHG) were generated by industrial activities. In comparison, industrial emissions accounted for 22% of the total U.S. GHG emissions. Furthermore, the power sector in Singapore releases almost 40% the country’s total GHG emissions. While Singapore has invested in emissions-reductions measures that have delivered significant GHG abatement (such as fuel switching from heating oil to natural gas), there is a long road ahead to achieve its decarbonization targets. Powering Singapore’s economy in a low-carbon future demands the deployment of decarbonization solutions tailored to realize Singapore’s climate goals while ensuring a clean, affordable and reliable low-carbon energy future. This will include reliable and affordable low-carbon energy supply from import sources and the adoption of CCUS to curb carbon emissions and produce useful products for Singapore’s economy.

On June 23rd 2021, Singapore’s National Climate Change Secretariat (NCCS) released two feasibility studies aimed at supporting the country’s climate commitments. The first report, “Study of Hydrogen Imports and Downstream Applications for Singapore”, concluded that hydrogen could be a decarbonization enabler for Singapore’s maritime and industrial sector. According to the Energy Technology Perspectives 2020 report from IEA, ammonia, hydrogen, and biofuels will meet more than 80% of bunkering fuel needs in 2070, with ammonia as the primary bunkering fuel pool component. Therefore, it should come as no surprise that Singapore is actively cooperating with local and international partners to explore ammonia bunkering development.

The study also concluded that hydrogen could be deployed for electricity generation and to decarbonize heavy-duty transport. Singapore currently depends on natural gas to generate its electricity. Since renewable energy resources are limited to support the country’s energy demand, hydrogen has been identified as a zero-carbon fuel to enable the power sector’s transition from natural gas to very low emissions.

The second feasibility study, “Carbon Capture, Storage, and Utilisation: Decarbonisation Pathways for Singapore’s Energy and Chemicals Sectors”, focused on identifying carbon dioxide sources in hard-to-abate sectors for storage and utilization purposes. Carbon dioxide could be captured and stored in suitable sub-surface geological formations. However, there are no known suitable carbon dioxide storage reservoirs in Singapore so further investigation and cooperation with neighboring countries will be required to realize this decarbonization pathway. Some of the potential options identified in the study include transport of carbon dioxide via pipelines to suitable storage reservoirs in Malaysia or via ships to depleted gas wells in Vietnam. Furthermore, the study indicated that captured carbon dioxide could be used to produce products aligned with Singapore’s strategic and economic interest, such as aggregates (for construction or land reclamation) or for synthetic fuels production. CCUS could therefore become an important decarbonization technology to support Singapore’s climate targets.

Energy Sources and the Development of a Hydrogen Supply Chain

In a low-carbon energy world, Singapore is likely to continue importing energy to power its economy. The city-state has limited land to generate solar energy, low wind speed and no hydropower. Renewables are likely to face serious limitations. The Study of Hydrogen Imports and Downstream applications for Singapore assessed 12 potential hydrogen import sources from different nations, including Malaysia, Australia, New Zealand, Oman, Chile and Norway. Singapore has announced that a Memorandum of Understanding has been signed with Australia on low-emission technologies and with Chile on low-carbon hydrogen and is actively engaging with other countries.  In addition to the discussions to secure reliable and affordable low-carbon hydrogen, Singapore is pursuing partnering with key players that could support the development of a low-carbon hydrogen value chain.

Singapore, a small city-state, must rely on energy imports to fuel its economy and plan for a climate-resilient future. Given its strategic port operations, bunkering hub activities and prominent industrial cluster position, Singapore has the potential to become an important hydrogen hub in the future and reduce its emissions by adopting hydrogen and CCUS to decarbonize its economy and achieve its climate goals. As a first mover, Singapore could be instrumental in establishing cooperation with countries with hydrogen export potential in Southeast Asia and beyond to move the needle to initiate a low-carbon hydrogen value chain. Additionally, due to its influential position as the major world’s bunkering hub, Singapore is well placed to lead efforts to develop ammonia bunkering operations for the decarbonization of the maritime sector.