Massachusetts steps up to the climate challenge, embracing a technology neutral approach to its clean energy standard – but the Commonwealth can go further, and must to meet global warming solutions act requirements.

Given rapidly changing federal policy on combating climate change, it is all the more important that states take the lead. The Commonwealth of Massachusetts is continuing to take steps in the right direction, shoring up state rules requiring climate pollution emissions reductions from multiple sources.  After our colleagues and sometime clients at the Conservation Law Foundation scored a stunning win before the Massachusetts Supreme Judicial Court in Kain v. Department of Environmental Protection, 474 Mass. 278 (2016), the Governor and the Department got to work on new rules governing state vehicles, electric systems, electricity generation, and natural gas systems in the state.

CATF was pleased to be able to offer some comments recently on the Department’s proposed Clean Energy Standard and emissions caps for power plants, and the proposal to reduce natural gas methane releases.  The proposal responds to the Kain decision directing the state to effectuate the mandate in the Massachusetts Global Warming Solutions Act, M.G.L. c. 21N, that Massachusetts achieve 80% reductions from 1990 greenhouse gas levels by 2050.  The action also is particularly significant right now as a model for other states in an era in which the federal government is likely to do little or nothing to reduce climate pollution. While there is a lot to be pleased about in the Massachusetts proposal, there are disappointments as well.

The good news: all zero carbon sources can play. Massachusetts has proposed a Clean Energy Standard that is technology-neutral and is designed to drive grid carbon emissions down by 80% by 2050.  Embracing nuclear power and carbon capture and sequestration (CCS) on fossil fueled power plants as eligible for Clean Energy Credits, alongside renewable energy such as wind and solar, is likely to radically improve our chances of meeting that target. Nuclear energy provides 75% of the region’s carbon free electricity today (most of the rest comes from large scale hydro-electricity).

While wind, solar and hydroelectricity will likely contribute to deep carbon reductions in the region’s grid, as our comments demonstrate, it would be risky to bet only on those sources. To meet the 80% goal with just wind and solar, for example, would require more than a dozen onshore and offshore wind mega-projects in Massachusetts each the size of the largest windfarms in the world (the fate of Cape Wind, a comparatively small project, suggests the difficulty). And meeting even half of the goal with expanded hydroelectric power would require more than doubling our current significant purchase from Canada and building associated transmission.  Solar energy, while providing 0.6% of the Commonwealth’s electricity today, faces the hurdle of low availability (typically solar in Massachusetts produces energy less than 20% of its actual capacity) and scale.

In addition, even with heavy wind and solar contributions in the New England – as shown in figures 1 and 2 below, we’d still need lots of standby generating capacity – probably natural gas – to keep the lights on. This is true even if we had cheap battery storage, which can ride through energy deficits created by hours of low wind and sun, but not multiple days and weeks (the white spaces below the blue load lines). That would add lots of cost. Even seasonal energy storage, which doesn’t exist yet, could help, but, it, too, would be expensive, and run at low very utilization rate.

Figure 1. Modeled wind and solar vs load for New England in May at an 80% Clean Energy Standard (Y axis is megawatts of capacity; X axis is hours in the month). Baseload natural gas or nuclear generation must fill the gaps. 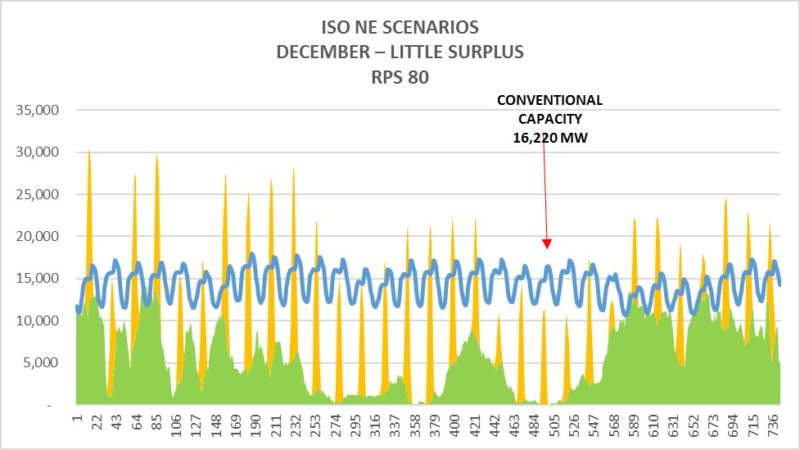 Figure 2.  Modeled wind and solar vs load for New England in December at an 80% Clean Energy Standard (Y axis is megawatts of capacity; X axis is hours in the month). Baseload natural gas or nuclear generation must fill the gaps.

Massachusetts has been a leader in carbon capture – the Bellingham plant for years captured the carbon dioxide it produced in generating energy from natural gas – although it has been assumed that the region lacked carbon sequestration potential.  Not so, as we point out in our comments – sequestration options have been mapped on and offshore of the Commonwealth.

Fig. 3.  Map showing general areas (darker areas) where potential targets for geologic carbon sequestration in Massachusetts might be possible. These include: A) deep saline aquifers in the New Haven arkose and Sugarloaf arkose in the Connecticut Valley; B) Organic rich shales in the Connecticut Valley; C) unmineable coal beds in the Narragansett. 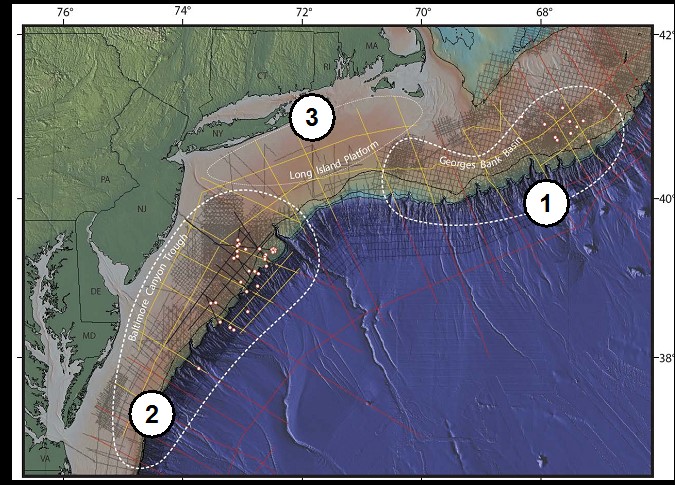 The region has not commissioned a new nuclear power plant since Seabrook 1 came on line in 1990, and we recently shut off Vermont Yankee (with the result that New England carbon dioxide emissions went up measurably last year).

That may need to change. Today’s nuclear plants are safer and, while not cheap, they are competitive with solar and offshore wind in the region. Advanced nuclear plants, some moving beyond water cooling, are on the horizon in the next decade, and are likely to be far less expensive and faster the build than the current generation.

In short: It is just not plausible to get from where we are today to the 80% reduction mandate in Massachusetts, without including and encouraging all zero- and near-zero emitting technologies to play under the Clean Energy Standard, and we applaud the Commonwealth for doing so.

Massachusetts can do better.  That being said, unfortunately the Department was not aggressive enough in some respects with this proposal.

First, the proposed emissions cap for power plants is not nearly as robustly supported as it can and should be, nor is it nearly as deep as it could be.  While allowing nuclear generation and CCS-controlled power plants to generate Clean Energy Credits, the Department apparently does not factor in the availability of those technologies in establishing the power plant caps, contrary to the Global Warming Solutions Act section 4 directive to look to the “maximum technologically feasible reductions” in planning and rulemaking.  As noted above, there will be a significant need for new natural gas plants to firm the additional renewable energy load, and without CCS – or a performance standard for those plants based on the application of CCS on new plants – the Commonwealth’s 2050 cap will simply not be achievable. We strongly encourage the Commonwealth to propose and finalize a CCS-based performance standard for new natural gas power plants as the next phase of GWSA implementation.

Second, the Department’s proposals for reducing methane emissions from natural gas and oil infrastructure in the state leave the vast majority of the state’s methane releases uncontrolled.  Methane, a highly potent greenhouse gas that makes up the vast majority of natural gas, causes 87 times as much warming in the 20 years after emission than the same amount of carbon dioxide does.

While other states are taking steps to reduce methane emissions from oil and gas infrastructure of all kinds, Massachusetts has proposed only to address certain companies’ leaky distribution pipelines, and only for the next three years.  Setting standards applicable to larger aboveground distribution facilities, and existing natural gas transmission facilities including LNG storage and import facilities in the Commonwealth can yield far more significant reductions in this pollution than the less than one tenth of a percent the Department’s proposal is estimated to achieve.  Reducing these emissions can happen with simple and low cost measures and methods.

In Conclusion, Massachusetts has long been a climate leader and innovator.  These rules provide an opportunity that the Commonwealth should not miss, to move forward towards a truly cleaner energy future.  We applaud the technology-neutral nature of the new Clean Energy Standard, but strongly urge the Department to go further towards meeting the statutory directive to plan and set standards based on the maximum technologically feasible reductions in power sector carbon dioxide and natural gas infrastructure methane emissions.