Sick of Soot: How the EPA Can Save Lives by Cleaning Up Fine Particle Air Pollution 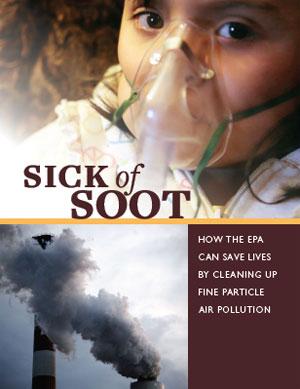 The U.S. Environmental Protection Agency (EPA) must soon update national health standards for fine particulate matter air pollution (PM2.5), commonly referred to as soot—a major cause of premature death and a widespread threat to those who suffer from lung and heart disease. The national health standards are critical tools that drive the cleanup of soot pollution across the country.

According to the EPA, fine particle pollution:

The EPA will choose an updated national health standard from a range of possible options. In April 2011, staff scientists at the EPA made a series of recommendations to Administrator Lisa Jackson. These recommendations were based on a review of current research on the health effects of PM2.5, conducted by the EPA National Center for Environmental Assessment and vetted by the Clean Air Scientific Advisory Committee (CASAC), an independent body that offers technical advice to the EPA on ambient air quality standards. Health Benefits of Alternative PM2.5 Standards, a new analysis prepared for the American Lung Association, Clean Air Task Force and Earthjustice, examines these and other options and estimates the life- and costsaving potential for each scenario of reduced soot pollution.

Based on the analysis, the options currently under consideration at the EPA are not strong enough to protect public health with an adequate margin of safety. These organizations recommend that the EPA adopt a health standard at the strongest end of the range of options considered by the analysis—an annual standard of 11 micrograms per cubic meter (μg/m3) and a daily standard of 25 μg/m3.

Meeting this standard could prevent as many as 35,700 premature deaths every year, in addition to delivering major reductions in harm to people with heart and respiratory disease. Overall, the nation could benefit by as much as $281 billion every year from reduced costs associated with premature death and disease.

The Clean Air Act requires the EPA to follow science and protect public health. To comply with the law, it should adopt the PM2.5 health standard recommended by this report.

Sick of Soot: How the EPA Can Save Lives by Cleaning Up Fine Particle Air Pollution