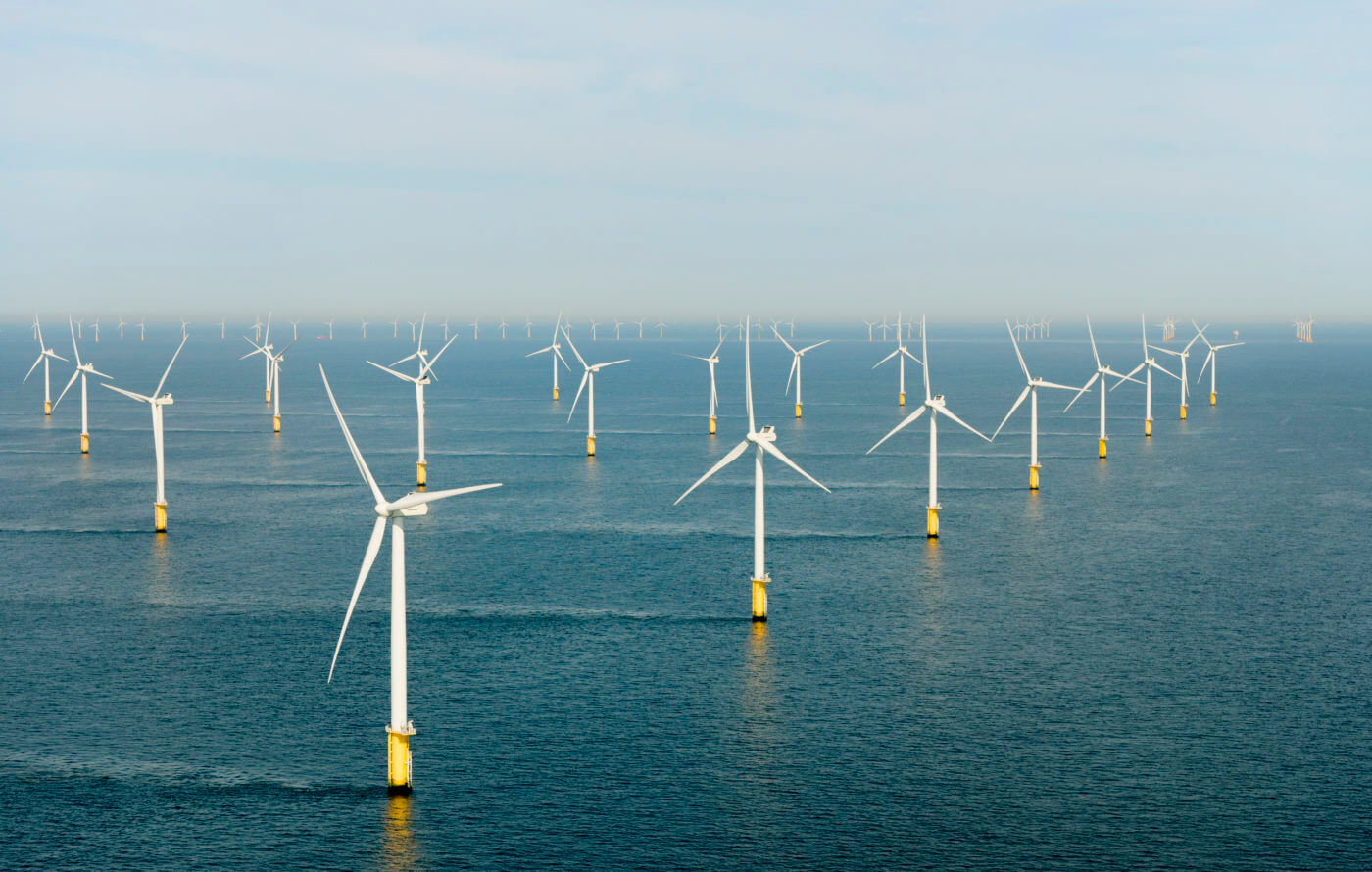 Europe’s future energy system is expected to be made up of a combination of renewables, nuclear and abated fossil fuels. It’s likely that renewables will make a substantial fraction of this mix, with wind energy in particular set for rapid expansion in the coming decades. Some studies suggest wind alone will supply 50% of the bloc’s energy demand by 2050.

Whichever way you look at it, we can expect an energy infrastructure construction boom in the coming decades. Wind turbines are predominantly made of steel, one of Europe’s high-energy industries facing substantial decarbonisation challenges.

Globally, the majority of fresh (as opposed to recycled) steel is currently produced using fossil fuel blast furnaces, reliant on coking coal or fossil gas to achieve the high temperatures and chemical reactions needed to smelt iron ore. Currently, no alternative methods for producing fresh steel at scale without fossil fuels have been successful, although several alternative methods are being experimented with, including hydrogen fueled furnaces and steel produced via electrolysis. Unless these alternative methods can reach the scale and low costs needed to keep European steel manufacturers competitive, we are going to see extremely high emissions from soaring steel demand.

The European steel industry needs an adequate policy framework to ensure that it can transition to a climate-neutral operation while maintaining its competitiveness. This includes wind electricity in a decarbonised value chain.

Europe has been using wind power since the Middle Ages. Restored windmills in bucolic Dutch landscapes remind us of a time when harnessed wind power drained water from the lowlands to prevent flooding. Windmills were also used for many other activities, including grinding grains, sawing wood and pressing seeds for oil. In Castilla de la Mancha, Spain, some of the windmills that inspired Cervantes can be visited by tourists following the footsteps of Don Quixote. In today’s digitalised society, we rely on a modernised version of this familiar technology to transition to a new energy system. However, while we have managed to harness the wind power to generate renewable electricity, the steel we use for building these modern wind turbines is not produced in decarbonised value chains.

Steel is at the heart of wind turbine production

The process of building wind turbines requires considerable amounts of energy, in part because they are made of at least 70% steel. Energy-intensive industries, including iron and steel, were responsible for 15% of the total EU’s greenhouse gas emissions in 2015. These industries are crucial in the transition towards climate neutrality. They produce the building blocks for societies to transition to energy systems that are kinder to the environment, and they are an essential source of employment in Europe.

Today, wind turbines are produced with the legacy of the Second Industrial Revolution energy systems and associated greenhouse gas emissions. Despite decades of efficiency improvements, the steel industry is still far from being climate neutral. To illustrate, emissions totalled 1.85 tonnes of CO2 per tonne of steel produced in 2020. The European Union is the world’s second largest steel producer, with approximately 150 million tonnes production per year, accounting for 2.6 million direct and indirect jobs in the bloc. Germany, Italy, France, and Spain are the largest European steel producers, making up more than 50% of the total EU production. Europe’s steel industry emits 221 Mt of GHG emissions per year or about 6% of the total EU’s GHG emissions.

Remscheid, a city where parts for wind turbines are produced

Remscheid is a city located in Germany’s industrial North Rhine-Westphalia. A city with a solid industrial legacy and a long history of tool and machinery manufacturing. Take Dirostahl, a family-owned company based in Remscheid, with more than 400 years of forging tradition. It employs about 500 people and produces between 50,000 and 70,000 tons of steel products per year. Today, 50% of its product portfolio is destined for the renewable electricity generation industry as it manufactures gear and bearing wheels that are essential in the building process of wind turbines. Dirostahl is an example of a company where know-how and products marry perfectly with Europe’s Green Deal vision. However, while steel forging companies like Dirostahl produce some components required to build the future energy system, it is far from easy for them to transition to a low-emissions operations model in the current policy, market, and funding landscape.

Energy-intensive industries are hard to decarbonise because their energy demand cannot be commercially delivered through electrification alone. A steel forging company like Dirostahl heats their ovens to 1200 degrees Celsius with fossil gas. They forge large steel parts (remember we are talking about giant wind turbines) that cannot be produced in electric ovens due to a combination of their dimensions and process energy requirements.

A reliable, secure, and affordable energy supply is needed to forge those massive parts of wind turbines. Today, fossil gas checks all those boxes. Can companies like Dirostahl deploy other decarbonisation technologies such as carbon capture to abate the emissions or hydrogen as zero-carbon fuel instead of natural gas? The answer is yes. They must deploy decarbonisation technologies or their operations will not be viable in a climate-neutral Europe. The challenge lies in creating an adequate ecosystem where energy-intensive industries can transition to low-emissions operations without losing competitiveness to non-EU producers that are not beholden to ambitious decarbonisation targets.

From theory to practice

Let’s take a step back. Companies like Dirostahl have managed to modernise their operations and improve energy systems to reduce emissions and pollution over time. In the case of Dirostahl, the current owner’s ancestors were almost all blacksmiths since the XVI century. That is a century before Don Quixote and his horse ended tossed in the ground after he gave a thrust into the sail of an operating windmill.

A company with 400 years of forging-family tradition should be resilient enough to transition to a low-emissions energy system. After all, it switched from coal to heavy oil in the middle of the last century. In the 1970s, it switched to natural gas from heavy oil. They currently use state-of-the-art steel forging technology and have adopted efficiency measures to reduce energy consumption. The next step, adopting zero-carbon fuels or carbon capture and storage technology, is more disruptive and expensive.

Dirostahl consumes about 200 GWh per year of natural gas. If it deployed renewable hydrogen to satisfy its energy demand, it would need 20 tonnes of hydrogen per day or the equivalent of 30 MW of installed electrolysers capacity. There are massive challenges associated with installing electrolysers on site. Some of them include the operation of the electrolysers, the additional footprint required and, finally, the electricity transmission system needed to deliver the renewable energy to the site. Not to mention the associated increase in production costs, which are prohibitive in the current global market.

Currently, there are no pipelines supplying hydrogen to the region, making it challenging to consider hydrogen purchases from a third party in the foreseeable future. There are no pipelines to transport CO2 to a suitable geological storage location if carbon capture and storage is selected as the preferred decarbonisation technology in the North Rhine-Westphalia region. However, a recent study by the Wuppertal Institute for Climate, Environment and Energy found that a CO2 pipeline infrastructure to transport to storage sites abroad could prove instrumental in decarbonising the entire industrial sector in the area. In fact, 30 of the 50 identified point sources of CO2 in North Rhine-Westphalia could be connected for carbon capture and storage which would mitigate 97% of emissions from the sector. Developing the necessary hydrogen and CO2 pipelines is a key priority for the North Rhine-Westphalian Government, which has developed its own Carbon Management Strategy as a critical first step in decarbonising the region’s industrial sector.

What are the critical needs to accelerate the steel industry decarbonisation?

Infrastructure is one of the key aspects required for energy-intensive industries to transition to low-emissions systems. Zero-carbon fuels such as hydrogen must be transported from producers or importing terminals to end-users. With the Gas Package proposal, released in December 2021, the European Commission attempts to create the regulatory framework for a decarbonised gas system. The necessary infrastructure needed to transport captured carbon dioxide molecules from industrial installations to suitable geologic storage locations should be supported by the TEN-E and TEN-T regulations.

The commercialisation of technologies such as hydrogen burners at the capacity required for energy-intensive industries is also needed. Without this, there is no positive business case for these industries to transition to zero-carbon fuels. In a recent industrial decarbonisation event organised by Future Cleantech Architects, Dr Roman Diederich, Dirostahl’s Managing Director, indicated that transitioning from natural gas to renewable hydrogen would be translated into an increase of about €700 to €800 per tonne of steel, making their products uncompetitive in a globalised market.

Decarbonising the steel industry is crucial to ensure that the whole value chain of wind electricity is low carbon. Member states’ support for hydrogen infrastructure development will be essential in the coming years. This also applies to CO2 transport infrastructure. Policies such as Carbon Contracts for Difference (e.g., SDE++ in the Netherlands) will be critical to close the commercialisation gap of decarbonised technologies and realise decarbonisation projects.

The encouraging news is that the new German coalition agreement has acknowledged the need for a supportive framework to enable the transition to a climate-neutral industry, the creation of lead markets and the need for competitive power prices for industry.

Another piece of the decarbonisation puzzle will be in place when the giant wind turbines generating part of Europe’s renewable electricity are manufactured with low-carbon or renewable steel. Europe’s long-time affair with windmills would be taken to a level where they harness the power of the wind in a genuinely sustainable manner.