As we enter Climate Week, it’s a useful moment to review some recent expert reports suggesting the need for a broad suite of zero carbon energy technologies to manage climate change. In particular, these reports highlight the potentially critical role of carbon capture and sequestration (CCS) and nuclear energy alongside such options as wind and solar.

The first report is the Intergovernmental Panel on Climate Change’s report on climate mitigation, released this spring. The IPCC report synthesizes the work of dozens of research groups from around the world that attempted to model various scenarios to contain climate change within a variety of temperature boundaries. A principal finding of the report is that nuclear and CCS are central options to reducing the costs of climate mitigation. In the chart below, IPCC displays its finding that CCS availability might reduce the cost of achieving a median 450 ppm carbon limit by about 50% and as much as 65%. Nuclear’s contribution to reducing the total cost of climate mitigation is more modest, in the range of 5-10%, roughly on par with solar and wind. 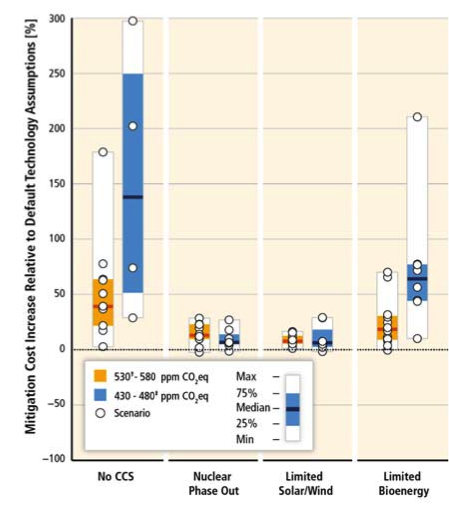 Intergovernmental Panel on Climate Change, Working Group III – Mitigation of Climate Change, Technical Summary, Table TS.13, at page 33. NB: According to Working Group III, the projected benefits from a large expansion in bioenergy do not fully account for related challenges such as “emissions leakage, biophysical and economic uncertainties, and potential non-climate social implications,” and are typically achieved “under the assumption of a highly idealized implementation, with immediate, global, and comprehensive availability of land-related mitigation options.” IGCC WGIII-AR5 Ch.6 at 44.

Significantly, the IPCC found that the “levelized costs of energy” from CCS and nuclear in the scenarios examined were competitive with other zero carbon electricity sources, and less expensive, in some cases substantially, than renewable options such as offshore wind, solar PV and concentrated solar power, as shown in the chart below. Importantly, this analysis likely understates the relative competitiveness of CCS and nuclear. Because fossil CCS and nuclear are available on demand (“dispatchable” in the industry lingo), they avoid the costs associated with back up of variable sources such as the wind and sun. Those additional back up costs can be quite significant as several recent studies have indicated, as much as doubling the system cost of these resources. 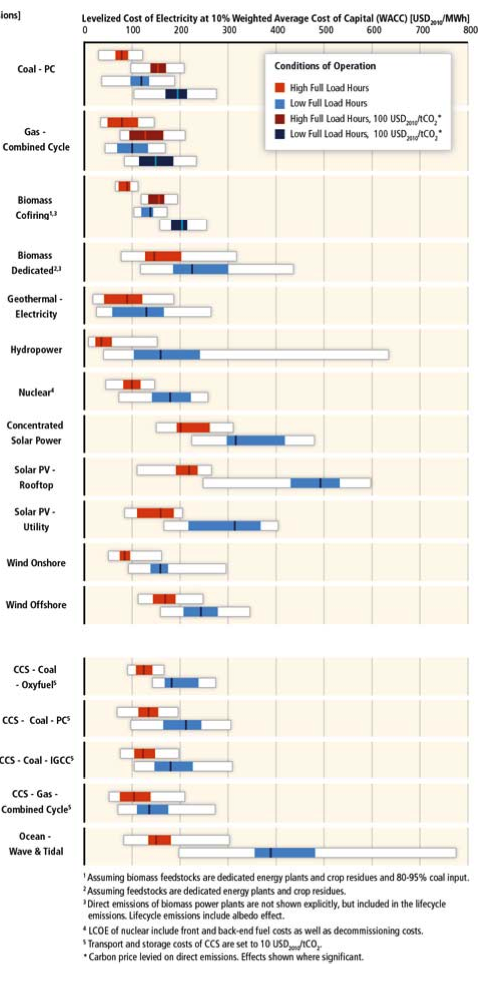 A second recent major expert analysis highlighting the potentially large contribution of CCS and nuclear to global climate mitigation is the July 2014 report on UN Sustainable Development Solutions Network report entitled “Pathways to Deep Decarbonization.” In this report, study teams from the 15 largest global CO2 emitters were asked to develop scenarios consistent with a 2-degree emissions target, using criteria of suitability and feasibility. 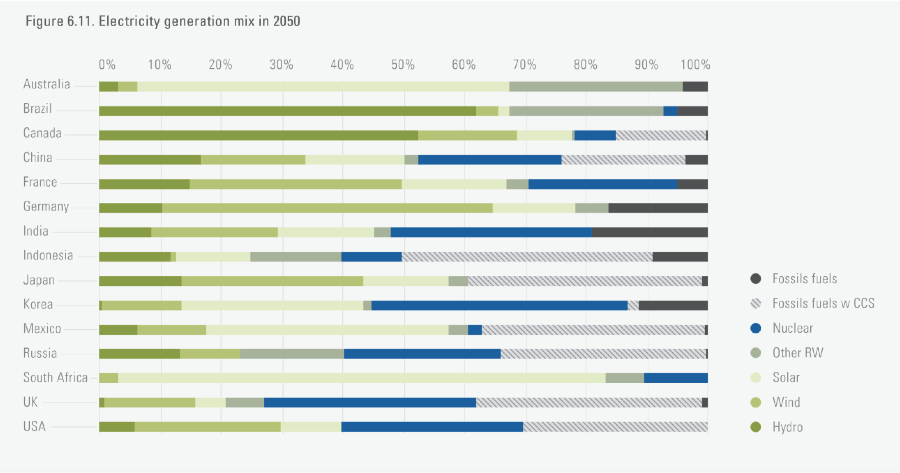 Finally, the report released last week by the Global Commission on the Economy and Climate envisions a substantial role for CCS and nuclear in carbon mitigation. As the summary table from the report below shows, the CCS and nuclear contributions to abatement are comparable in aggregate to those of wind and solar.

The messages from these reports plainly reflect the size of the climate challenge highlighted by numerous studies suggesting the potential need to essentially decarbonize the entire global energy system by mid-century to manage climate change effectively. With such a substantial lift in front of us, it is imperative that we move across all technology families – renewables, decarbonized fossil, nuclear energy — to continue to drive costs down and improve performance. To restrict ourselves to one or two options is a very big and unwise bet.

Big strides in renewables have been described elsewhere, the result of decades of R&D and early incentives for market scale-up. Less appreciated is the fact that nuclear energy, which already provides roughly a third of the world’s carbon free power (roughly four times that of wind and solar), is also set to increase its contribution as a major low carbon energy source with 71 reactors under construction around the world, while new advanced reactor designs may offer substantial improvements in speed of construction, safety, waste, and proliferation risk. And CCS, long an orphan in the deacarbonization effort, will be demonstrated at commercial scale at three new plants scheduled to come on line in the coming 24 months in Texas, Mississippi, and Canada.

Tackling climate change is an enormous, arguably unprecedented technical and management task. We will need everything we have, and more.

Clean Up All Local Gas Distribution Leaks (Not Just Underground!)