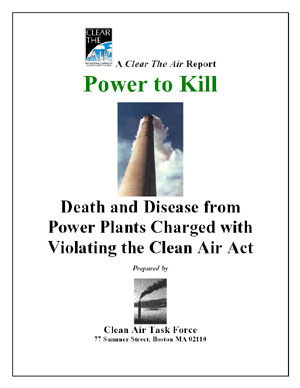 There are more than 500 major coal-fired power plants in the U.S. today, and the vast majority are decades old. Because of a “grandfathering” loophole in the Clean Air Act, these oldest, dirtiest plants have been able to avoid modern pollution controls. This loophole was granted because it was expected that these old plants would retire and be replaced by cleaner new plants, and therefore should not be made to meet modern standards. But an important limitation was placed on this loophole to keep it from being abused. To limit this loophole, a key provision of the Clean Air Act known as “New Source Review” or “NSR” was created. New Source Review requires the plant owners to upgrade their pollution controls to modern standards whenever they make modifications that extend the life of the plants and significantly increase their emissions.

In the last ten years, however, it has become clear that all too often this did not happen. In the 1990s, the United States Environmental Protection Agency (EPA) and the U.S. Department of Justice began to investigate electric power producers for violations of New Source Review. The investigation showed that for years many plant owners had been making major capital investments, extending the lives of their plants while increasing pollution without upgrading pollution controls  all in clear violation of the Clean Air Act. To date, the federal government, several states and certain environmental groups have brought enforcement actions against thirteen power companies for violations at 51 power plants in twelve states.

According to the Justice Department and EPA, the failure of the owners to install new emissions controls when they upgraded these plants has resulted in tens of millions of tons of sulfur dioxide, nitrogen oxides, and particulate matter. These pollutants impact a broad area of the Midwest, Southeast, and Northeast United States, increasing airborne concentrations of fine particles. These particles are associated with a variety of serious health impacts including increased asthma attacks and even premature death. However, the electric power industry has lobbied heavily to weaken New Source Review protections and stop the NSR enforcement actions.

Despite the high stakes for public health, the recently released Bush Energy Plan has thrown into doubt the future of efforts to curb these emissions. The White House has directed EPA to conduct a 90-day “review” of its NSR policy, and has told the Justice Department to review the statutory and regulatory basis for its enforcement actions.

The Bush Administration’s review of the NSR rules and enforcement cases has focused almost exclusively on industry’s claim that the rules are onerous because they prevent them from making necessary repairs and upgrades to improve efficiency and reliability of their power plants. Incredibly, the review has completely ignored the very real public health protections provided by the NSR rules and the potential of the enforcement cases to deliver significant health benefits through large emission reductions from the plants.

In this report, the Clean Air Task Force draws on data from a previous study by Abt Associates in order to quantify the death and disease from the power plants that have been charged with NSR violations. The report shows just how many premature deaths and asthma attacks are due to the fine particle pollution from these plants, and also estimates how many asthma attacks and deaths would be avoided each year if these plants were required to meet modern standards as a result of successful NSR enforcement.

Key findings of this report include: