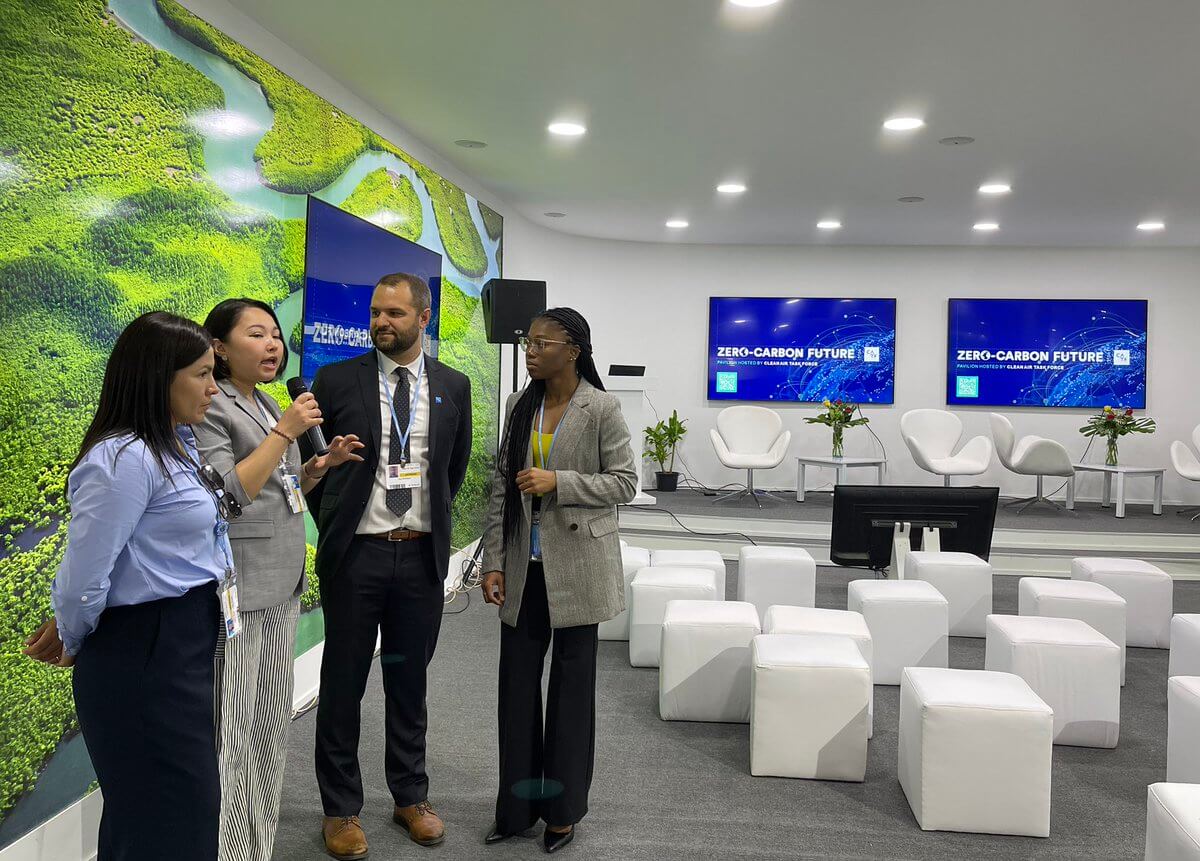 Nuclear energy was front and center at COP27 in Egypt, with world leaders hosting serious discussions and making major announcements showcasing nuclear energy’s contributions to easing the global energy crisis while driving decarbonization around the world.

The interview below has been edited for clarity.

Troy Shaheen: Here at the Zero-Carbon Future Pavilion, we are putting a focus on the variety of solutions we’re going to need to achieve a zero-carbon future. Could you tell me a little bit about where nuclear fits in there and how nuclear energy plays a critical role in decreasing carbon emissions?

Troy Shaheen: What is the value of clean, firm power? Why is having that 24/7 resource important, particularly as it’s incorporated into an approach with a broad suite of technologies?

Dinara Ermakova: First of all, having reliable power is important when we want to remove the carbon from the economy. At the same time, it’s more important for countries which are in a stage of development because they don’t have any other options at this point. Switching to something that’s not providing 24-hours of electricity is dangerous, because we cannot power our medical facility or school at the whim of weather. In this case, it’s usually better to have something reliable to keep up with a developing economy. In addition, the small land footprint for very densely populated regions, such as Bangladesh or Nigeria don’t have enough land to choose between agricultural sector or putting solar farms. We need to account for those things. This is where we need to think about how climate change mitigation strategies within developing worlds are different from developed and western countries’ strategies.

Dr. Charlyne Smith: The demand for energy is increasing, and it will continue to increase. From what we know, nuclear energy is one of the most reliable, consistent solutions to address that energy demand. For developing countries like Jamaica the need for that 24-hour energy is going to be extremely important, not only for climate change, as we can see from the increasing frequency of extreme weather events and how we can lose power for nine months to a year in developing countries. It’s important that we have a steady, consistent, reliable source of energy that can not only address the energy reliability issue during extreme weather events and the aftermath that comes, but also for day-to-day usage. I think it’s important, especially in countries in the Caribbean that do not utilize nuclear energy. It’s a unique opportunity for those countries to start considering that transition to cleaner sources of energy. We do use renewables, but it’s not the majority source of energy that is used in the Caribbean and I think that is a unique opportunity for the Caribbean to take advantage of.

Troy Shaheen: Where do we stand with advanced nuclear? What are the exciting developments, and how are those developments helping to address some of the hurdles that have been in the way in the past?

Shirly Rodriguez: It doesn’t mean anything if we keep designing new technology if regulations are not hand-in-hand with that. Nuclear energy has many benefits, not just energy. We are here because of climate change, but considering nuclear energy overall, we have agricultural benefits, we have medicine benefits, and we have aerospace benefits. We need to implement and foster that communication to the people. It’s amazing. There are over 72 small modular reactors waiting to be deployed, but we cannot deploy them if we don’t have the regulations to support them.

Dinara Ermakova: There are so many avenues for commercial solutions that are useful for developing countries. For example, hydrogen production and decarbonizing steel and cement production, those are very carbon-intensive fields. This is where the developing world can benefit. If we put solar and wind together, how can we balance the load on the transmission lines? A nuclear power plant can produce electricity, and when we have too much electricity coming from solar and wind, we can produce hydrogen. We can provide high-quality heat for cement, and district heating. There are so many things we could do with one particular source of energy combined with other renewables, just by thinking creatively on how we can deliver the message to developing world about the benefits.

Dr. Charlyne Smith: One of the main barriers that are inhibiting, you know, fast deployment of nuclear energy technologies is that disconnect between the public and the private sector. I think those two sectors need to communicate more effectively, so that we can get on track to our net-zero goals. Based on what I’ve seen, you have to have these policymakers engage with the stakeholders to try to fast- track or to figure out exactly what is necessary and what is needed regarding the licensing process of these new reactors. If they’re not communicating with each other, then we’re only creating more and more delays, and we’re falling back from reaching those target goals.

Troy Shaheen: At COP27, nuclear energy is part of the conversation seemingly in a way that it hasn’t necessarily been in the past. Why do you think there is this momentum around nuclear energy as a climate solution?

Dinara Ermakova: The momentum has been growing steadily from year to year for the past four years, but this year specifically since we faced the energy crisis in Europe and there is no cheap gas anymore. This is where many countries like Germany, Sweden, and even Japan started looking into their policies about nuclear energy and started rethinking their own nuclear energy strategy. Today has shown that in Europe in particular, which was so heavily dependent on gas, that we cannot do it all on renewables and gas. We need something as a baseline, another solution. We need a diverse set of solutions, where nuclear energy has its own role.

Dr. Charlyne Smith: I think people are slowly starting to realize that we don’t have much other options. We know based on the facts the capacity factor of what nuclear energy can bring to the table. It’s almost undebatable at this point particularly because we’re running out of time. People are starting to get on the train just to figure out well, I wasn’t in favor of nuclear before, but at this state that we are in right now, if we just consider only a specific category of clean energy technology, it will not be enough in order to meet the net-zero goals that we set.

Shirly Rodriguez: I’m impressed about the exponential growth, how nuclear energy conversations have increased, and the lack of presence that we had last year compared to this year. I want to thank everyone. I know there are a lot of people behind us and in front of us who will see the benefits of nuclear and hopefully, next COP or at further COPs, we will have more conversations and actions. We hope that all country leaders can see that and can support clean energy and the development of clean energy like nuclear.