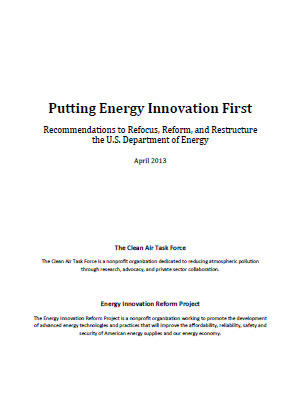 It is widely accepted that America’s global scientific, technical, and economic leadership depend on high-quality education, world-class scientific research, competitive markets, and entrepreneurship. Robust innovation, which is dependent on those factors (among others), is almost universally regarded as a prerequisite for American success in an increasingly competitive global market.

The large corporate R&D laboratories of the 1950s and 1960s run by corporations such as AT&T, Westinghouse, IBM, Exxon, and General Electric, have all arguably declined in scope and ambition as their parent organizations turned toward maximizing shareholder value in the shorter term, deemphasizing long-term R&D. Today, there is no private sector laboratory comparable with the old Bell Labs that won seven Nobel prizes, invented the transistor and the laser, and first demonstrated a practical solar photovoltaic cell. Importantly, Bell Labs was known for both its basic research activities and its applied research and development activities leading to commercial products.

Meanwhile, the venture capital markets that helped drive transformations of the telecommunications and information technology industries have had only marginal effects on innovation in national and global energy systems, despite some very high profile efforts. This is not surprising since venture capital investments tend to involve numerous, smaller tranches of investment funding made over a limited period of time. Energy investments at scale often require large, “lumpy” investments made over a long time.

With the departure of the private sector from many aspects of basic and applied energy research, many have looked to the Department of Energy’s national laboratories to fill the void. As policymakers debate the appropriate role for government in support of innovation, questions often arise about the basic capabilities of the Department of Energy (DOE) and its laboratories. This paper explores DOE’s role and structure and the opportunity to fundamentally reshape the department in ways that could significantly improve its effectiveness.