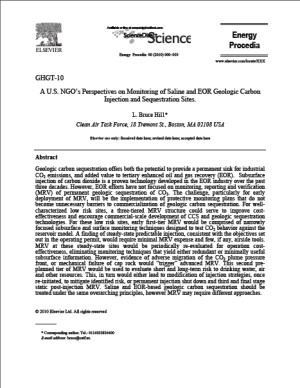 Geologic carbon sequestration offers both the potential to provide a permanent sink for industrial CO2 emissions, and added value to tertiary enhanced oil and gas recovery (EOR). Subsurface injection of carbon dioxide is a proven technology developed in the EOR industry over the past three decades. However, EOR efforts have not focused on monitoring, reporting and verification (MRV) of permanent geologic sequestration of CO2. The challenge, particularly for early deployment of MRV, will be the implementation of protective monitoring plans that do not become unnecessary barriers to commercialization of geologic carbon sequestration. For well-characterized low risk sites, a three-tiered MRV structure could serve to improve cost-effectiveness and encourage commercial-scale development of CCS and geologic sequestration technologies. For these low risk sites, early first-tier MRV would be comprised of narrowly focused subsurface and surface monitoring techniques designed to test CO2 behavior against the reservoir model. A finding of steady-state predictable injection, consistent with the objectives set out in the operating permit, would require minimal MRV expense and few, if any, airside tools. MRV at these steady-state sites would be periodically re-evaluated for operation cost-effectiveness, eliminating monitoring techniques that yield either redundant or minimally useful subsurface information. However, evidence of adverse migration of the CO2 plume pressure front, or mechanical failure of cap rock would “trigger” advanced MRV. This second pre-planned tier of MRV would be used to evaluate short and long-term risk to drinking water, air and other resources. This, in turn would either lead to modification of injection strategies, once re-initiated, to mitigate identified risk, or permanent injection shut down and third and final stage static post-injection MRV. Saline and EOR-based geologic carbon sequestration should be treated under the same overarching principles, however MRV may require different approaches.