Air of Injustice: How Air Pollution Affects the Health of Hispanics and Latinos 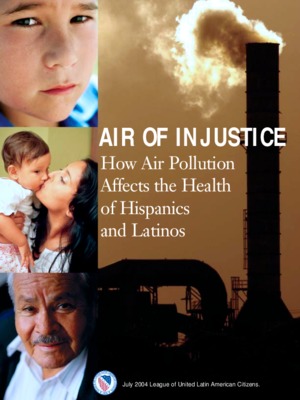 Hispanic families suffer serious health effects caused by air pollution. Studies show that the very air breathed by Hispanic Americans is likely to be harmful to their health. Latino children and adults living in polluted areas are more likely to suffer adverse health effects, such as asthma attacks. For many, the situation is worsened by a lack of health insurance and by language barriers.

Air pollution from power plant smokestacks, cars and trucks, construction equipment, and other sources includes fine particle “soot” pollution, ozone smog and dangerous air toxics such as mercury. The health effects of these pollutants include breathing problems, stunted lung growth, and babies that are born with low birth weight, among many other serious health effects. Air pollution is keeping children with asthma home from school, as the incidence of asthma in Latino families reaches epidemic proportions.

The air in Latino communities violates air quality standards. More than half of the U.S. population (55 percent) lives in areas with unhealthy levels of ozone or particle pollution. Hispanics make up 13 percent of the U.S. population, yet in 2002 more than seven out of ten Hispanics (71 percent) lived in counties that violated federal air pollution standards for one or more pollutants.

Thirty-nine percent of the Latino population lives within 30 miles of a power plant – the distance within which the maximum effects of fine particle soot from the smokestack plume are expected to occur.

Hispanics living below the poverty level are more likely to be vulnerable to the effects of air pollution. High poverty rates restrict housing options for Latino families, and lack of health insurance limits access to quality health care. These economic factors exacerbate the impact air pollution has on low-income families. About 52 percent of Hispanics under the age of 65 do not have insurance and overall Hispanics account for an alarming one-quarter of the nation’s 74 million uninsured people. Poverty and uninsured rates are even higher for Spanish-speaking Hispanics.

Power plant emissions of mercury contaminate fish, posing a major health threat to the Latino community. 1.3 million Hispanics nationwide actively participate in fishing as a recreational, social, or family activity.  However, much of the Latino community is unaware that invisible toxic chemicals, such as mercury, PCBs and pesticides, might be present in the water that they fish in or in the fish that they eat. InanumberofstudiesithasbeenshownthatLatino sport and commercial anglers catch a variety of sportfish and consume fish more frequently, than white consumers. At the same time, Hispanics and other minorities are less likely than whites to be aware of fish consumption advisories.

Global warming could seriously affect the health, economic and social well being of Hispanics. Warming of the planet together with more drought conditions in some regions and flooding in others could induce crop failures, famines, flooding and other environmental, economic and social problems. At highest risk are communities that have the fewest technical and social resources.

Hispanics are regularly excluded from federal research activities and data collection efforts. The exclusion of Hispanics from these critical national data systems means that environmental health issues affecting Hispanics are going undocumented. Although many Latino communities are in close proximity to power plants, they have the least amount of representation with the health researchers who inform our nation’s policymakers.

Air of Injustice: How Air Pollution Affects the Health of Hispanics and Latinos