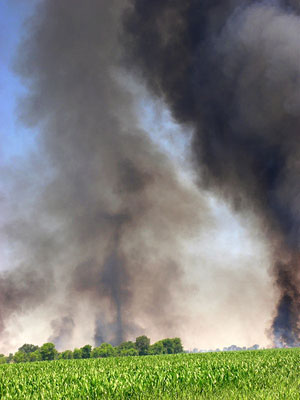 Over the past century, the Arctic has been warming at nearly twice the rate of the rest of the planet. While increases in carbon dioxide and other greenhouse gases account for much of this steep warming trend, the Arctic is also highly sensitive to short-lived pollutants – gases and aerosols that travel north from lower latitudes, impacting the Arctic climate in the near term. Black carbon aerosol, or soot, which is produced through incomplete combustion of biomass and fossil fuels, accounts for as much as 30 percent of Arctic warming to date, according to recent estimates. Springtime deposits of black carbon pose a particular threat to the Arctic climate because of their potential to accelerate melting of snow and ice.

Agricultural fires, intended to remove crop residues for new planting or clear brush for grazing, contribute a significant portion of the black carbon from biomass burning that reaches the Arctic in spring. Remote sensing of fires in non-forest lands, combined with analysis of chemical transport models and fire emissions databases, reveal that concentrations of black carbon from agricultural burning are highest in areas across Eurasia – from Eastern Europe, through southern and Siberian Russia, into Northeastern China, and in the northern part of North America’s grain belt. The top emitters, in descending order, include: Russia, Kazakhstan, China, United States, Canada and Ukraine.

Regulations on agricultural burning have a poor rate of enforcement in many countries. Russia and Kazakhstan officially ban open-field burning at the Ministry level, yet fires frequently occur on agricultural (and former-agricultural) lands and often spread into adjacent grasslands and forest, creating large blazes. China also prohibits crop waste burning, but again the practice is widespread, especially in the northeast, where black carbon emissions are most likely to affect the Arctic. The United States and Canada have rules varying by state and province that aim to limit the impact of agricultural fires on air quality and surrounding property, while allowing “necessary” burning to take place.

Spring agricultural fires – though generally smaller and shorter in duration than forest fires – have a large cumulative effect on Arctic pollution levels. These burns result in transport and deposition to the Arctic during the most vulnerable period for sea ice melt; moreover, lower burn temperatures smolder, emitting higher concentrations of the products of incomplete carbon combustion. Thus these fires present a clear target for mitigation. Recent advances in remote sensing and modeling techniques have improved the conditions for identifying the sources of biomass burning emissions and measuring their relative climate impact. At the same time, new agricultural technologies, such as such as crop-straw gasification and biochar, may offer promising alternatives to open-field burning of crop waste. The task of reducing black carbon’s impact on the Arctic demands a concerted, region-specific, approach to agricultural fires – one that combines economically viable innovation, with increased monitoring and regulation.