A Preliminary Evaluation of the Potential for Surface Water Quality Impacts from Fly Ash Disposal at the Navajo Mine, New Mexico 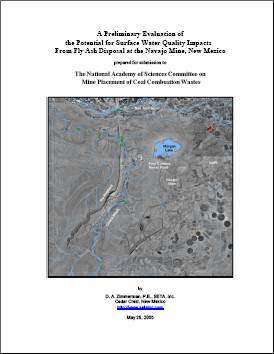 An analysis of environmental monitoring data near a fly ash disposal area at the Navajo Mine, New Mexico was conducted to i) independently determine whether there are any indications of ash-constituent migration away from the mine and ii) evaluate the validity of claims made by BHP Billiton, the operator of the mine, concerning the lack of impact or potential impact on the environment from ash disposal operations at the mine.

The initial evaluation was conducted using only the data provided in a BHP report used to support their claim of ash disposal having “negligible impact on the environment.” The analysis of the Bitsui Wash monitoring network, a cluster of shallow wells screened in ash, spoils and coal seams, revealed elevated levels and increasing trends of ash-constituent parameters in the down gradient groundwater flow direction. The data configuration suggest that diffusion of ash constituents is contributing to the elevated levels of ash-migration parameters in wells that are in close proximity to the ash well and that the monitoring record needs to be extended to prove or disprove this theory.

The diffusion theory is consistent with the observed data; the BHP conclusions, on the other hand, fail to reconcile with the data. Furthermore, several serious deficiencies in the monitoring network were identified that render its usefulness for detecting offsite migration of ash constituents rather dubious. Chief among these is the fact that the background well was located such that it intercepts water that has been passing through the mine for the last 30 years.

The analyses conducted in this preliminary investigation resulted in diametrically opposite conclusions to those promulgated by BHP regarding existing or potential environmental impacts from fly ash disposal operations at the mine.

A Preliminary Evaluation of the Potential for Surface Water Quality Impacts from Fly Ash Disposal at the Navajo Mine, New Mexico