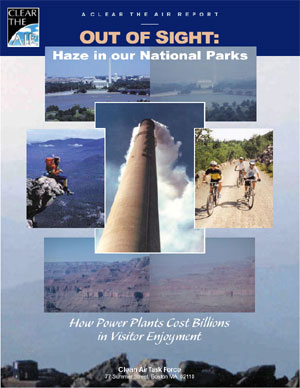 Wilderness is at the heart of our national identity. The sheer beauty and variety of America’s natural environment, the vastness of her natural resources – and our responses to them throughout our history – define us as a nation. In Walden, Henry David Thoreau wrote:

“Our village life would stagnate if it were not for the unexplored forests and meadows which surround it. We need the tonic of wildnessthat the land and sea be infinitely wild. We must be refreshed by the sight of inexhaustible vigor, vast and titanic features“

In recognition of this, Americans have created the national parks, with the goal of preserving our most treasured areas. Little did the founders of the park system dream that these places would also serve as economic engines to communities throughout the U.S.

Over the past half-century our national gems- America’s national parks, wilderness areas and national wildlife refuges-have become shrouded in a milky white haze. Gone are the days when you could find respite from the smog-filled air of the cities in a family vacation to a national park or forest. What is causing this blight on our treasured vacation spots? Although many believe that summertime haze is simply a result of heat and humidity, scientists have determined that haze is actually due to the same fine particles that cause acid rain and tens of thousands of premature deaths each year – fine particles primarily caused by pollution from power plants. According to U.S. EPA, power plants are responsible for over two-thirds of the sulfate particles that are the chief cause of haze in the U.S.

Since the mid 20th century, following World War II, our appetite for electricity has dramatically increased, and along with it came huge increases in emissions of sulfur dioxide and other visibility-harming pollutants from coalfired electrical power plants. Sulfur dioxide, an extremely harmful gas, converts to acidic sulfate particulate matter in the atmosphere, and is the principal cause of the thick haze that obscures the natural vistas in the Great Smoky Mountains, Shenandoah, Acadia, Grand Canyon and many other national parks.

Poor air quality in some national parks and wilderness areas rivals that in major U.S. cities. Regional haze has reduced annual average visibility in our national parks and wilderness areas to about one-third (west) to one-quarter (east) of natural conditions. For example, the average natural visual range in Virginia’s Shenandoah National Park and in the Great Smoky Mountains of Tennessee and North Carolina is about 80-90 miles, while average summertime visibility has been reduced to a paltry 12 miles.

Hazy parks are parks at risk. A 1998 report showed that visibility and “clean, clear air” were among the most important park attributes to visitors. At some parks, as many as 80% of respondents felt clear air and visibility were very to extremely important to their recreational experience. Take away the clear view, and you remove vacationers’ primary reason for visiting the parks.

Laid to Waste: The Dirty Secret of Combustion Waste from America's Power Plants