Worldwide, a staggering 36 billion metric tons of carbon dioxide (CO2) are emitted into the atmosphere each year, with 25% of the total coming from power generation. The good news is: today’s technology can already capture CO2 emissions from fossil energy plants and inject and permanently lock them deep underground in geological formations. The process is called geological sequestration (GS). But how safe is it?

To answer that, it is helpful first to understand that for three decades, to enhance oil production, each year the U.S. petroleum industry has been successfully injecting 35 million metric tons of CO2 — the equivalent of eight coal fired power plants — into deep rock formations – a total of nearly a half a billion metric tons. The town of Seminole in West Texas sits over one of the country’s oldest and largest EOR facilities, where oil recovery operations are currently injecting one million tons per year, with no harmful subsequent release of CO2. In fact, in enhanced oil recovery (EOR), engineers find that the expensive naturally-mined CO2 they now use for this purpose is hard to recycle back out of the rock for its reuse. EOR is, in fact, carbon sequestration; the “S” in CCS (carbon capture and sequestration from coal and natural gas fired power plants).

The concept of carbon capture and sequestration (CCS) is quite simple: carbon dioxide is chemically “captured” and separated from the emissions of a modern power plant and the resulting nearly pure CO2 stream is compressed to almost liquid state and pumped underground. The hosting rock layers (typically sandstones) are proven traps—known to hold geologic fluids and/or gases. These host rocks must lie beneath a “cap rock” of dense mudstones (e.g. shale) through which the CO2 cannot ascend. Across the U.S., there are large underground geologic sources of CO2 occurring in sandstones capped by impermeable shale. For example in Mississippi there is a 150 -200 million year old underground geologic structure that contains half a billion tons of CO2. If natural CO2, oil and gas deposits can stay in such underground structures on geologic time scales, so can CO2 created by humans. 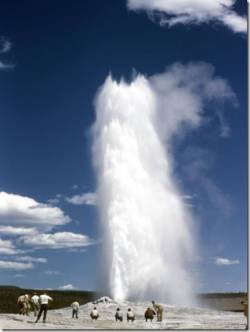 Old Faithful: happy onlookers as a mix of water and CO2 burst into the air. An estimated 17 million tons of CO2 are released in Yellowstone each year, with no ill effects to park visitors.

Because CO2 is hard to remove from rocks once injected, it is highly unlikely to escape to the atmosphere in any amounts that would pose any danger of significant ill health or environmental effects. It is true that at very high concentrations, CO2 can displace oxygen in the air and pose risk of asphyxiation. That said, geysers such as Old Faithful in Yellowstone National Park emit significant streams of mixed water and CO2 surrounded by happy onlookers without any ill effect.

Unfortunately, some opponents of carbon capture and sequestration use as a scare tactic the spectre of an incident that occurred in 1986 at Lake Nyos in Cameroon, in which 1746 lives were lost because of a highly unusual natural release of CO2. But that incident is a different story, involving an exceptional geologic situation, and not relevant to geologic sequestration. Lake Nyos fills a very recent (400 year old) crater in an active volcanic area. In that tropical setting, very large quantities of CO2 are released from volcanic fissures into the cold water at the lake bottom where, over a long period of time, the dissolved CO2 becomes concentrated in enormous amounts. In 1986, the cold water layer at the bottom of Lake Nyos was disrupted by a landslide releasing, all at once, two million metric tons of CO2, equivalent to the annual emissions of a small coal power plant. Being heavier than air, this blanket of CO2 settled on a local village and asphyxiated its residents. Critics of carbon sequestration wrongly call attention to the Lake Nyos tragedy – wrongly because the science says it involved an entirely different scenario, unique to areas that are at once volcanic and located in tropical climates where there is little natural turnover in the lake water.

Geologic sequestration would never be performed in geology like that at Lake Nyos, and, moreover GS must be carefully monitored. In geologic sequestration projects, CO2 is tracked underground as it becomes locked into microscopic pores in stable rock formations at least a half-mile deep. In a GS field, at the first sign of unexpected CO2 migration, a warning could be relayed to a control facility though a comprehensive subsurface monitoring program. An operator would then cease injection to reduce pressure and curtail the CO2 movement and investigate and remedy the problem or shut down operations in that area.

Another concern raised by opponents of CCS is the risk of human-induced earthquakes. When fluids are injected into rock at a pressure that exceeds the strength of the rock, such as in shale gas exploration, small cracks may form. This process, commonly known as “fracking,” occasionally results in microseismicity—mini-temblors measurable by extremely sensitive instruments, yet at levels rarely noticed by humans. However, unlike in gas exploration, CCS practices are designed to avoid fracturing. This is because microfractures reduce rather than enhance the volumes of CO2 that can be stored in the reservoir rock.

Seismicity prompted by deep fluid injections into rock has been extensively researched and those studies have found that injection practice has gone on for many decades without triggering damaging earthquakes. A recent study of seismicity in the oil and gas-producing Dallas-Fort Worth area by the University of Texas and Southern Methodist University states: “There are thousands of injection wells in Texas, the vast majority of which produce no felt or instrumentally recorded seismicity. “ In fact, over two billion tons of all kinds of fluids, including hazardous wastes, are injected deep underground in the U.S. each year, and only in limited cases have injection-related quakes reached levels that have been felt in and around nearby communities. At one of the world’s largest underground CO2 injection facilities, the Weyburn field of Canada, 17 million tons have been injected since 2000 with no attributable seismicity.

The real risk of GS is contamination of groundwater by movement of underground CO2 toward a fresh water aquifer. Thanks to new EPA regulations, a comprehensive system of monitoring will now be required to detect such movement (See November 22 blog “EPA’s New Rules Pave Way for Geologic Sequestration of CO2). Again, the answer lies in proper siting and project design. The key to aquifer protection is locating GS sites below thick impermeable barrier layers of rock that lie over the injection zone. Monitoring of the chemistry and pressure of layers immediately above that barrier is one measure under EPA’s program that can be adopted to provide an early warning of potential adverse CO2 migration. According to an independent study by the University of Texas, in the West Texas SACROC oilfield, with thousands of wells, operators have safely injected 175 million metric tons of CO2 (the equivalent of the annual output of 20 large power plants) since 1972 without harm to the fresh water aquifers above.

With global energy demand rapidly outstripping efforts to curb greenhouse gas emissions, carbon sequestration is a safe technology we can adopt now to reduce the climate impact of fossil fuel use. Employing the same skills that petroleum geologists use to produce oil and gas, we should be able to safely inject and store carbon dioxide for millions of years. Norwegian Statoil Hydro’s North Sea Sleipner field is yet another geologic sequestration project, where approximately 1 million tons of CO2 injected annually, toward a target capacity of 20 million tons of CO2 over the life of the project. There, engineers project a risk level that is orders of magnitude lower than the International Panel on Climate Change’s (IPCC) benchmark risk tolerance of 1 percent leakage in 1,000 years. Sleipner has been operating since 1996, with no discernible releases.

So, the technology is here. Now, let’s bring it to scale.