Last Wednesday, in the midst of CATF’s Staff Retreat, my colleague Jonathan Banks whispered an unexpected update in my ear: “they don’t have the votes.” We bolted out of the room and tuned the nearest TV to C-SPAN, where we checked the status of a procedural motion to proceed to a vote on a Congressional Review Act (CRA) repeal of the Bureau of Land Management Methane Waste Reduction Rule. Congress had already nullified 13 of former President Obama’s other regulations using the CRA: was methane about to be next? A simple majority was needed to move forward. There at the bottom of the screen, the count hovered at 49-51. Were we about to win? 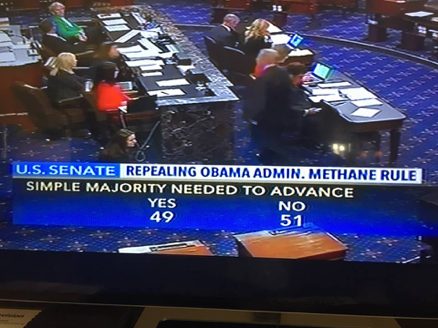 When the gavel came down, I literally jumped for joy: the voices of real people living near oil and gas facilities had prevailed over lobbying by the oil and gas industry. Three Republican Senators (Collins, Graham, and McCain) joined Democrats in opposing the repeal. Their constituents spoke up about the need to prevent oil and gas producers from securing a never-ending free pass to waste publicly owned resources, and these senators listened. Our champions, including Senators Udall and Heinrich of New Mexico, Bennet of Colorado, Cantwell of Washington, and leaders including Senators Durbin and Schumer also deserve praise for passionately defending the rule. They had plenty of good reasons to do so: reducing flaring, venting, and leaks of natural gas is a win-win for Western communities who will benefit from cleaner air, taxpayers across the US who will receive royalties on the saved gas, and the climate (curbing methane emissions is essential to meeting US climate targets). It’s no wonder that a recent poll found strong support for the standards nationwide: 73 percent of US adults favor federal regulations that require reductions in gas leaks, and 61 percent favor regulations to minimize flaring.[1]

The campaign for the Methane Waste Reduction Rule began several years ago, and the work continues. Dozens of organizations throughout the West and nationally joined us in pressing for strong standards to reduce wasteful and polluting flaring, venting, and methane leaks from oil and gas facilities on federal and tribal lands. Despite the common-sense nature of the final rule, the oil and gas industry wasted little time filing challenges in the federal district court in Wyoming and riling up their allies on Capitol Hill in the hopes of stalling the requirements to look for and fix their equipment leaks.[2] CATF attorneys, representing the National Wildlife Federation, and in partnership with several other environmental groups, successfully defeated industry motions seeking a preliminary injunction of the BLM rule. However, we must continue to defend the rule in the US District Court for the District of Wyoming when briefing begins this summer. 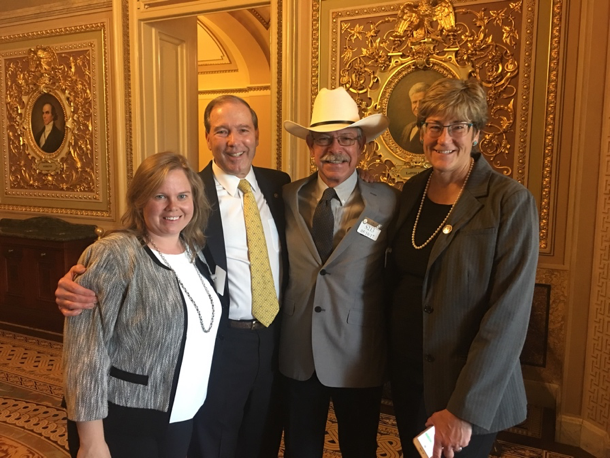 Staff and members of coalition partner Earthworks pose with Senator Merkley during last-minute lobbying off the Senate Floor.

We must also prepare for the likelihood of attacks from the Department of the Interior (DOI) itself. In response to Executive Order NO. 13783, DOI will try to rescind or at least weaken the rule administratively. Such actions will require public involvement, including the opportunity to submit comments for the docket, and CATF will stand side by side with our allies at every step of the way, working to ensure that the interests of the public prevail.

Reflecting on last week’s victory, my gratitude for the individuals across the country who spoke up about the desperate need to get a handle on wasted gas and the accompanying pollution continues to grow. It is not always easy to stand up and speak out in the face of powerful opposition by a wealthy industry, but thousands of people did just that and our democracy delivered them a meaningful win and one from which I will personally draw inspiration for years to come, especially as we continue our hard work to ensure that the rule is upheld in the courts and fully implemented by BLM.