A recent paper by Princeton researchers published in Environmental Science and Technology questions the compatibility of hydraulic fracturing (“fracking”) and geologic carbon storage and has received an unwarranted amount of attention. Despite the conclusions of the paper, the overwhelming evidence suggests that geologic storage can indeed coexist safely with other subsurface activities, including oil and gas extraction and shale gas operations. Here’s why:

The study is based on the simplistic assumption that where there is any overlap between a geologic carbon storage site and a shale gas site, the two activities are incompatible. Their claim rests on the assumption that a shale gas formation would necessarily be required to function as a “seal” to prevent escape of the CO2 stored in a geologic storage formation below it. In their paper, the authors represented this point with the following map that erroneously crosses off the geologic CO2 storage where there is shale gas production across most of the sedimentary basins in the U.S: 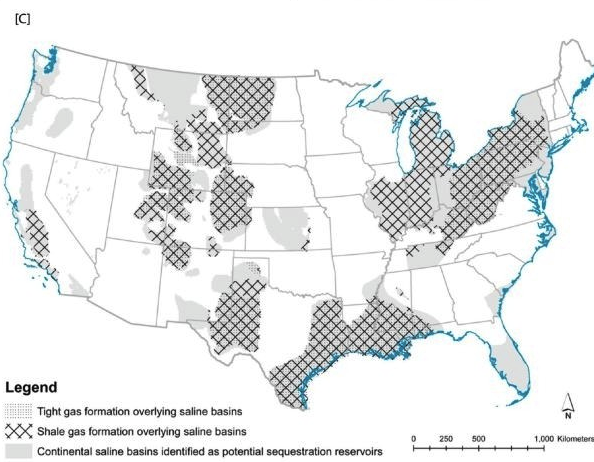 Map from Elliott and Celia 2012

The problem is that, by adopting these simple assumptions, Princeton team overlooked the third dimension – depth — and the thousands of feet of physical separation of the formations and attendant geologic complexity that typically exists below. Sedimentary basins do not consist of just two simple layers, i.e., the CO2 reservoir and the cap rock/shale gas layer. Instead, sedimentary sequences typically consist of thousands of feet of bedrock, with multiple layers of shale, sandstones, limestones (that may also be “tight” or largely impermeable). In fact, because CO2 must be injected in a fluid-like “supercritical” state, instead of as a gas, sequestration must take place a depths of over one-half mile. In the Illinois basin, for example, near the heart of the coal power industry, the nation’s biggest source of manmade CO2, carbon stored in deep saline aquifers there would have to travel upwards through multiple impermeable shale layers and other formations comprising nearly 7,000 feet of rock—over four times the height of the Sears Tower in Chicago– to reach the surface.

So the authors drew the false conclusion that one would necessarily exclude the other, given that these operations can safely co-exist where there are thousands of feet of vertical separation between carbon storage and shale gas zones with multiple confining zones in-between as our schematic diagram below (roughly based on ISGS generalized IL basin geology) clearly illustrates: 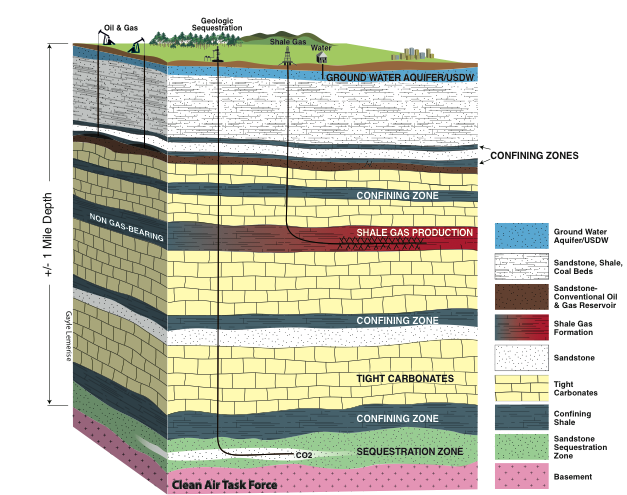 To reject the safety of geologic carbon storage based on a two-dimensional overlap of projects is like saying that two airliners cannot fly in the same airspace even though they may be vertically separated by thousands of feet. There is no unavoidable collision risk there. Similarly, in most sedimentary basins, unavoidable conflict between GS and fracking would be far lower than represented in this paper. So until the analysis is done in three dimensions–incorporating site-specific subsurface geologic data–the conclusions of this study are premature at best and highly misleading at worst.

All that said, there is an important take-home from this report: regulators should pay close attention to the interplay of shale gas and geologic storage development activities. Just as airliners operating in the same airspace need air traffic controllers, subsurface activities such as geologic storage and shale gas operations require geologic review, ongoing monitoring, and regulatory oversight to avoid conflicts. With sensible safeguards, it is likely that CO2 storage reservoirs can, in many areas, safely coexist in the same space with conventional and unconventional oil and gas operations, including shale gas production and hydraulic fracturing.

Lastly, as a practical matter, there is little reason to believe that shale gas activity will impede the development of carbon capture and storage technology. The Department of Energy (DOE) in 2012, estimated that U.S. geologic formations can provide 500 years of storage for North American CO2 emissions — 2 to 20 trillion metric tonnes. (U.S. annual power sector emissions are 2.4 billion tons.) A considerable portion of this estimated storage capacity is offshore where shale gas extraction would not be realistic. Furthermore, this analysis doesn’t take into account the DOE estimate of 120 billion tons of U.S. CO2 storage capacity in depleted petroleum-bearing formations that have contained oil and natural gas for millions of years. Finally, the Safe Drinking Water Act mandates that geologic storage operators must complete a comprehensive three-dimensional study of the geology and risks before CO2 injection and storage in saline aquifers can be initiated. The bottom line is that shale gas operations and hydraulic fracturing should pose no impediment to development of geologic carbon storage capacity in the U.S.

DoD: A Model for Energy Innovation?