Last week, the Administration took a bold step forward to curb greenhouse gas emissions. In a long-anticipated action, EPA proposed new source performance standards (NSPS) for fossil-fueled power plants that would limit emissions from new plants to a rate of 1,000 lbs. of CO2 per megawatt-hour, averaged annually. This level is comparable to the annual average emissions rate of the existing fleet of U.S. natural gas power plants. The rule levels the playing field between coal and gas on greenhouse gas emissions, so new coal and gas plants will compete on price. When finalized, the rule will provide a much-needed and long-overdue step on the path towards full decarbonization of all domestic coal and gas power plants

In the ensuing swirl of media coverage and stakeholder debate after the release of the draft rule, three key points must be considered:

All the key elements of CCS technology — capture, transport and sequestration of CO2 — for meeting the new standard are available and in use today. Scrubbers that can capture some or virtually all of the CO2 from smokestack emissions and synthesis gases have been available for decades and are already used today on coal and natural gas power plants. To transport the captured CO2, the U.S. has 4,000 miles of CO2 pipelines currently serving the enhanced oil recovery (EOR) industry, primarily in Texas. And, the U.S. oil industry has safely injected over a billion tons of CO2 since the mid 1970s into oil fields for enhanced oil recovery, and that CO2 remains trapped in the rocks that formerly held the recovered oil.

In addition, for the past 12 years the Dakota Gasification plant in Beulah, North Dakota has captured up to 2 million tons of CO2 per year and piped it to the oil fields in Saskatchewan, where it is sequestered. And, there are several U.S. coal projects under development that incorporate CCS technology, including:

Figure 1 below compares the relative emission levels of these proposed plants with the EPA’s proposed standard: 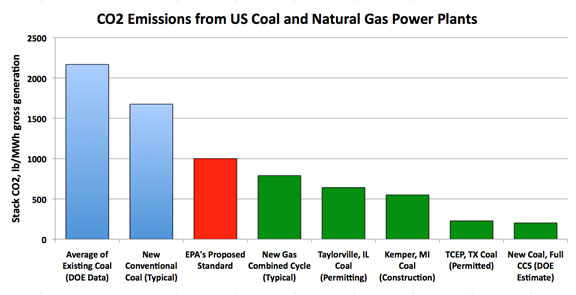 EPA’s draft rule has broad implications for building coal or gas power plants and points the way to the future of zero-carbon fossil energy. Even without the rule EPA has proposed, developers today favor new gas plant construction because natural gas prices are at an all time low and natural gas plants have lower capital and operating costs than coal plants. And, while natural gas prices appear likely to remain low due to the current boom in unconventional gas development, that may not always be the case (see figures 2 and 3). EPA’s proposed standards provide an important hedge against future energy sector CO2 emissions, which is necessary to keep CO2 emissions down after the point when natural gas prices ultimately increase. 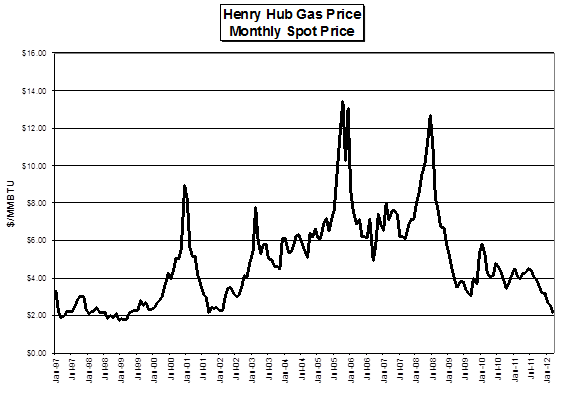 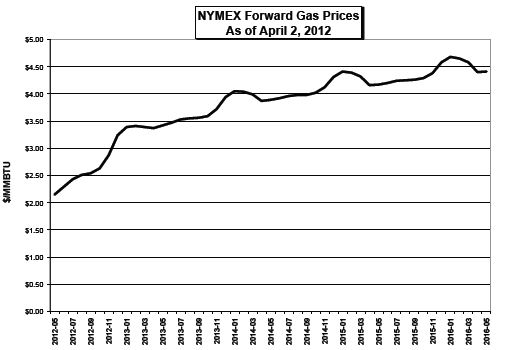 In addition to the important first regulatory signal provided by EPA’s proposal, there is latent commercial demand for CO2 that also can help move the CCS industry forward. According to a 2011 report by the National Energy Technology Laboratory, there is 20 billion tons of potential commercial CO2 demand related to enhanced oil recovery at existing on-shore oil fields in the U.S. This industry currently relies mostly on mined natural CO2. While there is not enough mined CO2 to meet that demand, new sources of captured anthropogenic CO2 from the power sector can. The EOR industry can utilize up to 94 GW worth of CO2 captured from coal-fired power plants over the next 30 years. This amount is substantially larger than the growth in base-load fossil power generation in the U.S. through 2035, as projected by the Energy Information Administration.

In short, the proposed standards provide the first-ever step in regulating the CO2 emissions from this leading emitting industry. They are not likely to change current power generation technology choices, but the new rules do provide an important limit for future emissions should the market swing back to coal power generation. And, because the standards by law must be reevaluated and revised periodically, and because existing source standards also must be evaluated now, EPA’s proposal also provides an important beginning to the much-needed process of reducing the carbon emissions from the entire fossil-fueled power sector. Clean Air Task Force therefore applauds EPA for proposing this rule and urges them to finalize it as soon as possible.