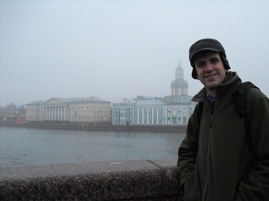 One long day down, and one to go at a global meeting in St. Petersburg, Russia, where climate scientists, fire experts, farmers, regulators and NGOs have been discussing the role of springtime fires on climate change in the Arctic and what must be done to reduce the occurrence of set fires in northern latitudes. The Arctic is warming at an alarming rate, threatening not just regional ecosystems but coastal areas around the world that are vulnerable to sea level rise.  Carbon dioxide is the main pollutant responsible for this warming, but recent research shows that black carbon, or soot, from incomplete combustion may also be responsible for much of the Arctic’s warming.  Samples from snow indicate that most of the black carbon in Arctic snow comes from burning biomass, and much of that is from burning crops and grasslands in northern Eurasia.

These crop and grass fires have local impacts too, of course.  These fires often get out of control and spread into forests and peatlands.  In fact, many of the deadly fires that plagued Russia this past summer began with fires set on grasslands or croplands.

In response to the growing threat, Clean Air Task Force and Bellona Russia have organized this event to

We’re not exactly sure where we’ll end up tomorrow, but conversations have been flying and we expect some useful closure by the end of the conference. More information about the meeting is available at http://www.fires-and-the-arctic.org.  After the meeting we’ll post presentations, meeting reports, and any other outcomes on that site.