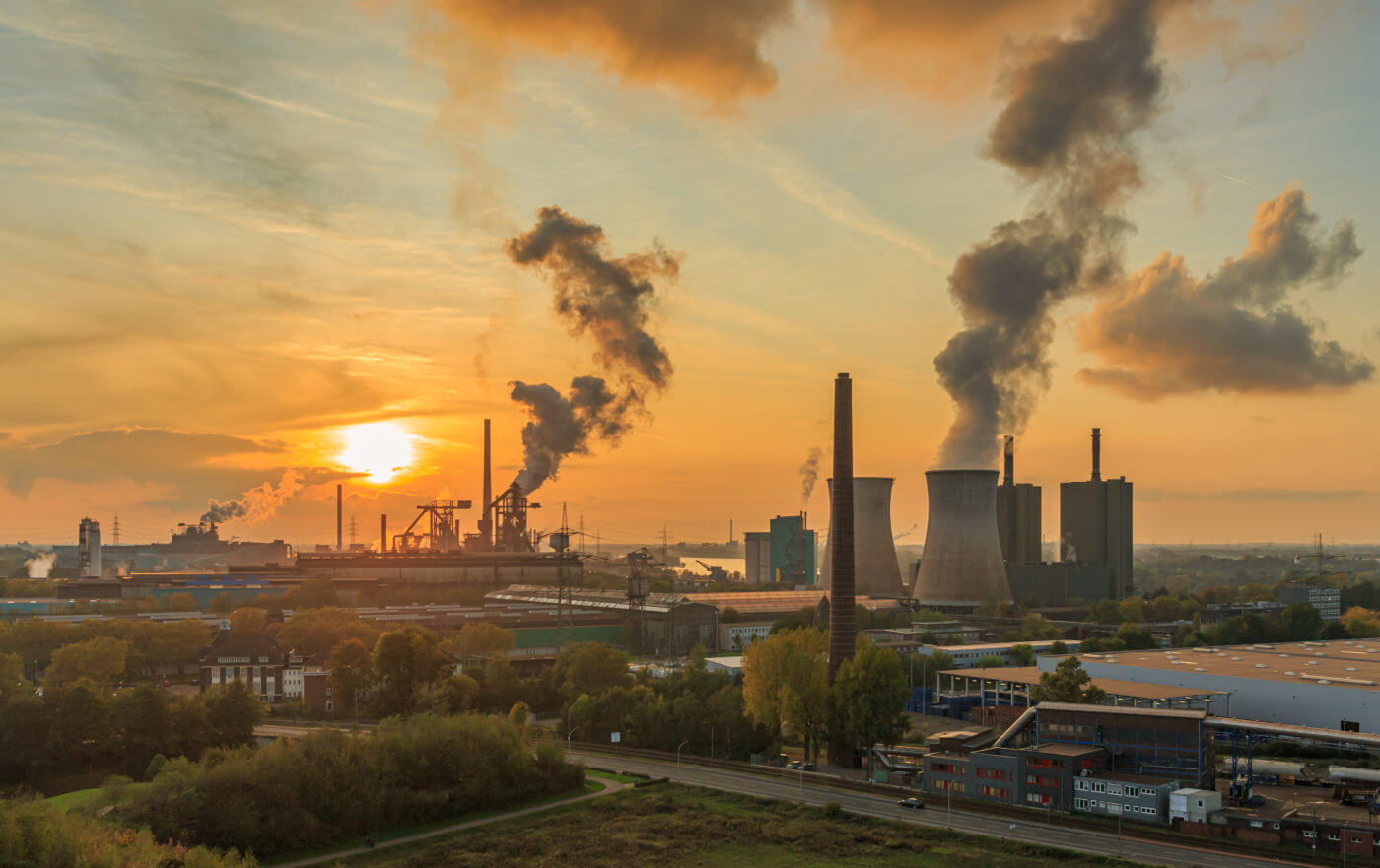 Industrial decarbonisation is a subject not widely discussed or covered by European online news networks or social media. Journalists and social media tend to gravitate towards other climate-related subjects such as transport emissions, natural disasters caused by global warming, electrification, and agricultural policy. These are all crucial areas related to the climate crisis that require attention and action.

However, industrial decarbonisation presents one of the hardest climate challenges, and the longer we ignore it, the harder it will become.

Two reasons to focus on the industrial sector: jobs and emissions

It was a cold winter morning in a control room of an industrial facility in Ruhr, a major industrial region in Western Germany, and I was on site to provide technical support. That morning the operating personnel were getting ready to commission a process unit in an oil refinery that produces feedstock for the petrochemical industry.

The refining and petrochemical industries are usually included in the hard-to-electrify sectors, also including iron and steel, minerals (cement), refining and chemical industries and employ about 3.2 million citizens or an estimated 11% of the total European industrial employment. The estimated emissions from these sectors in 2018 was 530 Mt CO2e or 70% of the total EU industrial emissions.

The control room was filled with field operators dressed in green overalls discussing the commissioning procedure, making sure that no detail was left unsaid, and that safety was at the heart and centre of any step they would take. A teenager of about 14 years old was the youngest person in the room. He was the son of a very experienced field operator and was closely – literally and figuratively – following his father’s footsteps. He was an industrial apprentice, somebody that one day would take the baton from his father and become an experienced operator. The young apprentice was certainly committed to learning the complex dynamics behind operating industrial facilities. He is one of the more than million faces employed in a sector that will require an energy and technology overhaul to meet its emissions reduction targets.

The energy transition will have an impact on the people and processes behind the products we consume. It will be a herculean effort for the European industrial sector and their employees to transition from an energy system shaped by the world’s Second Industrial Revolution to a system that is kinder to the environment. The energy transition transcends emissions and jobs. It should also build a bridge to ensure a thriving future to industrial employees, including young apprentices that have committed to contributing to Europe’s industrial legacy and would like to make the energy transition a reality.

What are hard-to-abate sectors?

Perhaps better termed ‘hard-to-electrify’, these are energy-intensive industries for whom transitioning to climate neutrality constitutes an extraordinary challenge because their energy and process demands will not be delivered commercially by technologies such as electrification in the near future. In the case of cement, due to the nature of the production process chemistry, the emissions will be significant even if the process heat is generated without emissions (i.e. via green electricity).

Likewise in ironmaking, chemical reducing agents are needed regardless of energy source. And in petrochemicals, some conversions inevitably result in excess carbon, while others require very high temperatures or are very sensitive to fuel costs and other factors. In addition, most energy intensive industries rely on reliable and affordable fossil fuels to generate the heat demanded by their processes.

The cement, iron and petrochemical industries are deeply embedded in our daily lives and have contributed immensely to shape the societies we live in and improve our living standards. Think of the steel used in the automobile industry, the cement used to erect our buildings, the fuels that move goods and people across different geographies, the fertilisers deployed in the agricultural sector or the basic materials for the plastics we consume. These industries are also crucial for the construction of a new energy system for Europe – from renewable energy facilities to energy efficient buildings to e-vehicles.

Thanks to the implementation of energy efficiency projects, policies geared to reduce emissions, and deployment of innovative technologies to decrease energy consumption, Europe has considerably reduced the CO2 emissions of its hard-to-abate industries already. Specifically, we have seen almost 30% reductions between 1990 and 2018. However, from this point onwards, there is only a limited carbon reduction that can be achieved without investment in other decarbonisation technologies such as carbon capture and storage or switching from fossil to low-carbon hydrogen fuels.

Across the EU, we see almost on a daily basis announcements of projects to decarbonise industrial sector facilities. Some projects have completed feasibility studies and are ready to move forward – if, crucially, they had a positive business case. Building new facilities isn’t enough; we also need a market for them to operate in.

The existing funding and policy support are insufficient to realise many of these projects. An example is the H-vision project in the Port of Rotterdam, EU’s largest port and one of EU’s major industrial clusters. H-vision has solid plans to produce low-carbon hydrogen from refineries’ residual industrial gases that are currently used as fuel in the installations’ energy mix. The project would allow various industries, mainly refineries and power plants to decarbonise by replacing natural gas, residual industrial gases and coal with low-carbon hydrogen. Additionally, it would also build the foundations for future renewable hydrogen integration. However, the Dutch SDE++ subsidy scheme, which incentivises decarbonisation technologies, does not support the production of low-carbon hydrogen as fuel.

In the sunny Iberian peninsula there are plans to build 800 MW electrolysers to produce green hydrogen  for the fertiliser industry but these will require further support for complete implementation. Other examples in the iron and steel industry include adoption of carbon capture and storage and hydrogen to curb emissions in France. Many projects have prequalified for Important Projects of Common EU Interest, such as the 500 MW green hydrogen production facility in Rotterdam, which is at the feasibility study stage.

The common denominators in many of the announced projects are the unknowns – both in terms of timeline and the business case. Additionally, the infrastructure required to decarbonise the industrial sector is often beyond the scope of the projects announced, which highlights the extent of the challenge ahead for energy intensive industries.

A myriad of uncertainties for investing in industrial decarbonisation

The technologies to achieve carbon neutrality are mature but high up-front capital cost and higher production costs without customers willing to pay for the clean “premium” are significant barriers to their deployment.

The uncertain future of Europe’s gas network creates further reservations about the technologies that will be selected to deliver decarbonised gas molecules. The European Commission is scheduled to deliver a revision of the Gas Package in December 2021 to facilitate the market entry of renewable and low-carbon gases in the European gas system. Fossil methane molecules are expected to be gradually replaced by biomethane and hydrogen to deliver energy to those areas of the economy that will require gas as an energy source, which includes the industrial sector. The Gas Package revision is a sensitive subject in Europe as it will shape how the gas network transition will take place and determine the role of low-carbon gas in the transition. But what will the low-carbon hydrogen acceptance criteria be? At this point, it is hard to tell – both for analysts and for industry looking to make investments.

There is a need for a robust, transparent, and verifiable GHG emissions accounting system for the development of the nascent market for abated gas. The system should be denominated primarily in terms of kilograms of greenhouse gases released to produce a kilogram of hydrogen instead of colour coding.

But how will the Gas Package address the issue of hydrogen imports to ensure that GHG emissions thresholds for imports of clean energy carriers such as hydrogen are harmonised with the EU’s acceptance criteria, on a basis of equal GHG calculation methodology? Perhaps with hydrogen certification and Guarantees of Origin (GO). A robust certification scheme is required in order to provide confidence to stakeholders across the value chain, whilst the level of complexity should be balanced against the characteristics of a nascent hydrogen market. Certification and GOs should also be aligned across EU and non-EU countries to facilitate cross-border trade, and import/export of low-carbon hydrogen. Understanding how all that would work raises tough questions (for example, very high embedded carbon emissions associated with some photovoltaic panels) that are currently unresolved.

Timing is crucial. Europe is still in the process of decarbonising its electricity grid. In 2020, wind and solar energy generated about one fifth of Europe’s electricity. Solar energy generation rose 9% and wind increased 15% when compared to 2019. Despite the encouraging growth in solar and wind energy share, renewables generation growth must nearly triple to reach Europe’s 2030 targets. Some studies project the need for an increase of 2,070 TWh electricity generation when compared to 2015. This represents almost four times the total energy electricity consumption in Germany in 2019. While 100% green hydrogen is considered the end goal in Europe’s Hydrogen Strategy, using renewable electricity to produce hydrogen while the grid is not fully decarbonised could be a counterintuitive approach to resources deployment.

Volume remains the central question. The climate conversation in Brussels has typically been distracted by arguments around the merits of renewable vs low-carbon or blue hydrogen. In reality, the conversation we need to have is about how we can produce enough hydrogen in order to wean the energy system off of unabated fossil fuels. Our policy discussions will be much more tethered to the task of decarbonising industry once this challenge is properly understood.

For Europe, decarbonising its industrial operations requires a holistic approach where technologies in the decarbonisation toolbox are deployed at the right stage of the energy transition journey in the most suitable sector. The industrial sector has a vital role in the transformation towards a climate-neutral economy. Policies and financial support at EU and member state level are required for industry to reduce its carbon footprint and remain competitive in a globalised world.

The Fit for 55 package was released by the European Commission in July 2021. While it represents a significant step towards creating a legislative framework to meet Europe climate goals, the road ahead to achieve industrial decarbonisation is long and full of uncertainties. EU institutions and member states will need to focus on policies tailored to the complexity of the decarbonisation challenge and work with industrial players to achieve the desired emissions reduction.

The right policy framework should be created around low-carbon hydrogen to provide the adequate incentives for investments. Policy mechanisms such as Carbon Contracts for Difference could support the development of low-carbon industrial technologies such as hydrogen and carbon capture and storage to accelerate the decarbonisation of Europe’s industrial system.

By creating a coherent policy framework, establishing funding mechanisms and providing a suitable environment for investors to materialise decarbonisation projects, Europe will be able to offer a viable future to more than three million people employed in their energy intensive industries and to export an industrial decarbonisation model to the world.