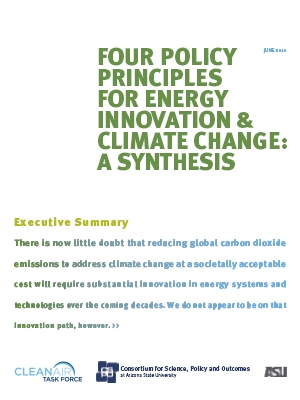 There is now little doubt that reducing global carbon dioxide emissions to address climate change at a societally acceptable cost will require substantial innovation in energy systems and technologies over the coming decades. We do not appear to be on that innovation path, however.

Over the last two years, several independent teams have sifted through history, experience and best practices on technology and energy innovation to suggest how we might get on that path. The teams include researchers organized by the Massachusetts Institute of Technology, Harvard University, Georgetown University, the National Bureau of Economic Research, the Brookings Institution, the National Endowment for Science, Technology and the Arts, the National Commission on Energy Policy, Arizona State University’s Consortium for Science, Policy and Outcomes, the Clean Air Task Force, and Clean Air-Cool Planet.

Despite the independence of the teams, collectively they display substantial convergence on four basic policy design principles, summarized, explained and illustrated further in this report:

Principle #1: Recognize that innovation policy is more than R&D policy: Innovation occurs through a complex set of interactions, most of which occur in the private sector. The best way to sustain innovation is to have technologies deployed in the field, where engineers and scientists can then begin to optimize existing technologies and work to improve them. A focus on R&D investment and policy is important, but only touches on a small part of the broader energy innovation system. Accordingly, successful policy will:

Principle #2: Pursue multiple innovation pathways. Just as no one technology will be able to solve the energy-climate problem, no one institution is capable of solving it either. A diverse ensemble of technologies should be pursued, recognizing that successful innovation is never certain and there will always be successes and failures. A successful innovation system will encourage technologies that will mature at a variety of short- to long-term timeframes: near-term, readily available technologies should not overwhelm and crowd-out potential new technologies. Some successful examples of government sponsored innovation, including information technology, aircraft, and to an extent agricultural technology, reflect competition among a variety of government programs. Successful policy will:

Principle #3: Recognize CO2 reduction as a public good, and pursue energy innovation through a public works model. The market currently does not price the negative societal effects of climate change into the costs of carbon-intensive technologies, which means that some needed technologies that are not cost competitive may not develop in the current system. Recognizing greenhouse gas (GHG) reduction as a public good makes the government the customer, just as it is for pandemic flu vaccines, flood control dams, or aircraft carriers. This perspective suggests new approaches for supporting energy innovation and GHG management, including the following:

Much work lies ahead to apply these principles to create specific innovation initiatives to meet the technology challenge posed by climate change. But the conclusions of the independent teams summarized in this report will provide policymakers with a useful head start.