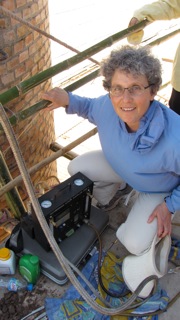 We got off to a slower than expected start – or at least slower than expected by me. This is my first kiln, but the veteran team I met up with has been measuring since early March. When we rendezvoused in Hanoi a couple of days ago, they already had seven Indian kilns under their belt. And they had already experienced delays from over-heated instruments, strikers on railroad tracks, intermittent power, no power, fuses blown out by oversized back up generators, and lowest person on the totem pole to buy from the only ice provider in town. Yesterday was delayed to build bamboo scaffolding and a platform, able to hold up to seven people plus a lot of equipment, and chisel a 10-centimeter diameter measurement opening, through four layers of flue-gas baked brick. Somehow the specs of what was needed for monitoring had gotten lost in the pre-planning translation.

The monitoring team took this hold-up in stride. I’ve learned that there are people cut out for monitoring work and people who aren’t. Not everyone can roll with the unexpected punches that come their way, and those who can’t, quickly find something else to do with their life. 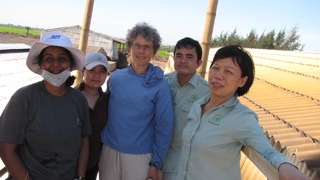 This brick kiln project is looking at a suite of emissions, including black and organic carbon, coupled with operation process observations. Black carbon inventories suggest that brick kilns are probably the largest global industrial source of black carbon, but, until now, there have been no measurements to allow us to characterize all the climate-relevant emissions. This project, supported by Shakti and Climateworks Foundation, is conducted by an international team from Vietnam, India and the U.S. Measured kilns range from high-emitting, village-scale operations, to what is expected to be lower- emitting, more mechanized and larger kilns, like the Tunnel kiln we are at now. After two days with the crew, it’s much clearer to me than ever why our black carbon emissions knowledge is as weak as it is. The equipment is a quirky work-in-progress, and completing measurements takes a lot of time, which is why I am back at the hotel at 11:00 pm and will return to the kiln site at 6:30 am.

Fieldwork will be completed in a few days, results are expected in mid July, and a final report and stakeholder meeting is set for early fall. These results, along with other work that has been conducted over the past decade on brick kilns, are expected to bolster efforts for upgrades in India and other Asian countries. Since many of the same people who have been working on this project are also the regional brick kiln experts, their combined expertise will continue to be tapped in developing feasible strategies for moving forward. The goal is cleaner-burning and more energy efficient kilns, reduced black carbon in the region, and benefits to regional and global climate. Stay tuned.

Natural Gas: Palliative, Not a Cure