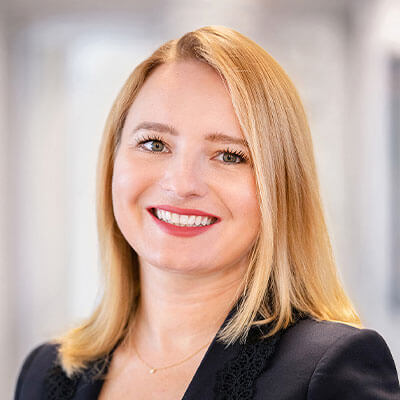 Lee Beck is CATF’s Senior Director in Europe, leading CATF’s cross-functional, cross-regional and cross-programmatic growth and climate policy impact in Europe. She also focuses on advancing CATF’s efforts on global climate policy, including at COP27 in Egypt.  Having worked on climate and clean energy and lived in the U.S. and Europe, Lee is an expert on transatlantic partnerships and international affairs, and is passionate about advancing and strengthening the transatlantic relationship to achieve climate goals.

Before stepping into her current role, Lee was CATF’s Global Director for carbon capture, leading the team’s expansion in the U.S., Europe, and the Middle East, and helping launch CATF’s overall European efforts. Under her leadership, the carbon capture team played an integral role in advancing cutting-edge carbon management policies globally. The team helped secure $12 billion in funding for carbon capture, removal and storage in the U.S. Infrastructure Bill, as well as make improvements to the 45Q tax credit, and push the vision for a European Strategy for Carbon Capture and Storage.

Lee came to CATF from the Global CCS Institute, where she served as a Senior Advisor leading the Institute’s advocacy efforts in North America, and was part of a global team focused on advocacy and policy. Previously, Lee worked for the Vermont Energy Investment Cooperation, and at Eni USA in their Washington DC International Relations Office, focusing on international affairs and government relations. She also worked for the EU Delegation to the U.S. as a trainee on transportation, energy, and environmental policy issues. Before working in the energy field, Lee was a journalist reporting for multiple outlets reporting from Germany, Italy, Tanzania and Hong Kong. She has a Master of Arts in International Affairs & Economics with majors in Energy, Resources & Environment and Political Economy from Johns Hopkins University’s School of Advanced International Studies (SAIS). Originally from Germany, she speaks German, French and Italian. She is a Nonresident Senior Fellow at the Atlantic Council Global Energy Center.