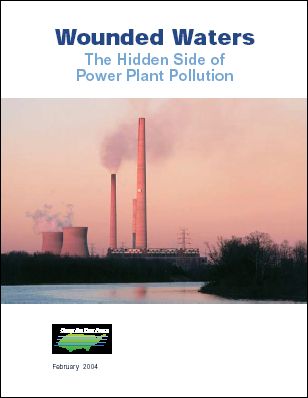 Power plants are widely recognized as major sources of air pollutants that damage human health and the environment. Less well recognized is the damage they cause to water, both as large users and polluters. These damages are the hidden dimension of power generation pollution. Lifting the veil off this problem is essential to both restoring and wisely using many of our nation.s waters.

The electricity generation industry withdraws about 15 percent of the total freshwater flow in United States each year  more than half as much as the contents of Lake Erie, consumes nearly half as much freshwater as all U.S. commercial and residential users combined, and discharges hundreds of billions of gallons of heated and treated waters back into US water bodies each day.

The environmental effects of these water withdrawals and discharges are substantial and include:

In addition, the demand for water by the electric utility sector increasingly competes with demands for other ecologic and economic needs. This competition is occurring throughout the U.S., including in regions considered to be water rich.

Fortunately, there are technologies that can avoid or minimize impacts and reduce water use.

In 2002, EPA decided not to require dry cooling for all new plants, but to allow a case-by-case determination. In early 2004, EPA will decide what technologies need to be applied to existing plants. For this upcoming decision, we call on the federal EPA to require, at a minimum, closedcycle re-circulating systems, and we advocate for the assessment of the cost/benefit of retrofitting with dry cooling systems as part of the permitting process.

We also call for a review and revision of the National Pollutant Discharge Elimination System (NPDES) program to insure that all chemical and thermal discharges meet the criteria of biological acceptability and that discharges are permitted, monitored and reported in a timely manner. Further, on water bodies with multiple power plants, we advocate for an evaluation of the cumulative impacts from water withdrawals and discharges.

Minefill Practices for Power Plant Waste: An Initial Review and Assessment of the Pennsylvania System